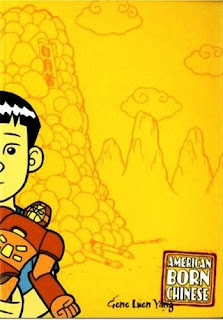 Gene Yang's coming-of-age story about a Chinese-American boy in the US has the distinction of being the first graphic novel awarded the Michael L. Printz Award for Young-Adult Literature and was also nominated for the National Book Award.

American Born Chinese (ABC) weaves together three narratives in surprising, evocative, and fantastical manner. It includes elements of the Monkey King legend, some partly autobiographical anecdotes, and a fictional, racist sitcom. ABC has generally been well reviewed as can be seen in this list compilation from the book's publisher, First Second.

Yang is a currently a computer science teacher at Bishop O'Dowd High School in California, and some of his earliest work was creating visual teaching aids for his math students.

Yang's official website is here, and here is a recent interview with him about his upcoming projects.
Posted by Stergios Botzakis at 1:39 PM