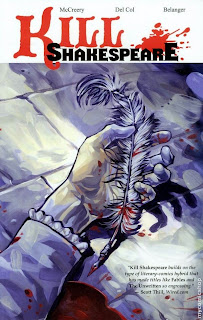 This graphic novel is a creative mash-up of Shakespeare's plays that forms a fantastical and compelling narrative. The action begins at the point in The Tragedy of Hamlet when Prince Hamlet is exiled to England. A pirate attack and nautical accident leaves him washed up on the shores of England where he is taken in by Richard III. The English king is forming an alliance with MacBeth and Iago in order to find the sorcerer William Shakespeare and take his magical quill that defines reality, and Hamlet is prophesied to be the only one capable of tracking down the wizard. As the famously indecisive prince ponders whether or not to trust this monarch the situation is complicated by the appearance of another faction, made up of Juliet, Othello, and Falstaff.

References, quotations, puns, and characters from the bard's many works appear throughout this book, and it is clearly a labor of love from a trio of Shakespeare aficionados. Anthony Del Col and Conor McCreery created the concept and write the series. Andy Belanger provides the art, which is energetic and expressive. More information about these creators can be found at the book's official site. This interview with the book's writers also sheds more light on the story's creation and direction.

All of the reviews I have read about the book have been full of praise. Fangoria's Jorge Solis concluded that this book is a "freshly original graphic novel" and "a highly enjoyable adventure." iFanboy's Ryan Haupt commented positively on the books deft combination of characterization, plot, and action. Mind Over Media called it a "fantastic little book" that "would make Shakespeare himself proud."

Kill Shakespeare began as a 12-issue limited series in 2010 and just reached completion. This collection contains the first half of the story. More information about the series, including previews and a trailer, is available here from the book's publisher IDW.
Posted by Stergios Botzakis at 12:00 PM