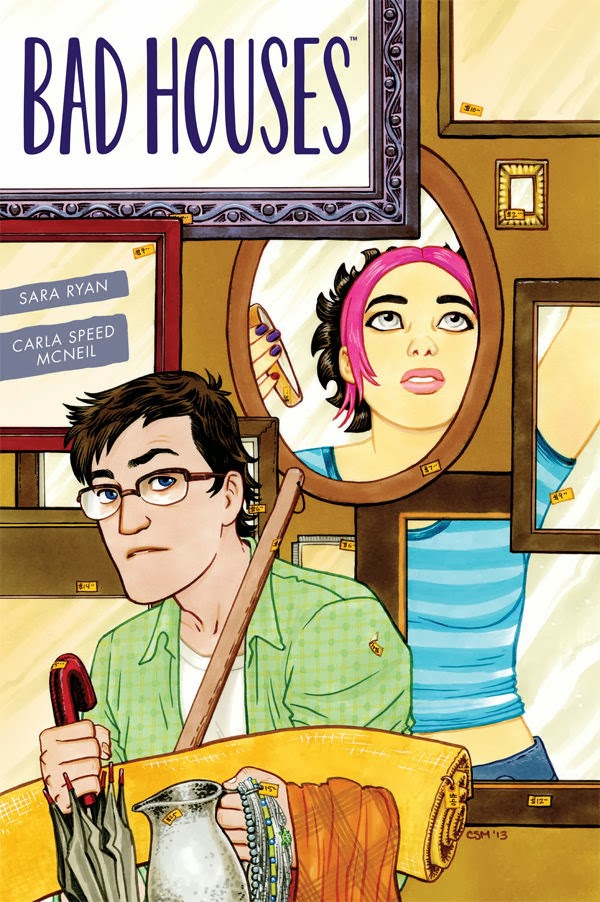 Bad Houses is a book about many things: young love, familial obligations, growing up, dealing with the past, and the connections between people's possessions and memories. It follows two young adults, Lewis, who works for his mother who organizes estate sales, and Anne, who lives with her mother who is a hoarder. They are both complex people in a narrative that powerfully and elegantly defines people's situations and contexts. 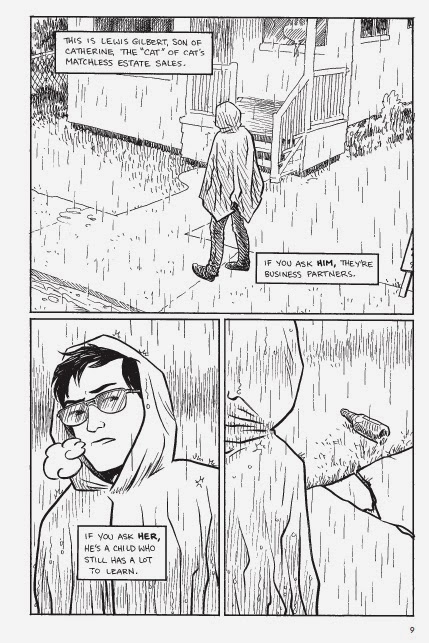 These two young people are trying to figure out how to live their lives and deal with the expectations of their respective single moms. Anne's situation is further complicated when her mother starts dating and wants her boyfriend to move in with them. So much of this book is involved with interpersonal relationships, and the powerful impacts that folks have on one another propels much of the plot. Certainly, events, some of them quite dramatic, occur, but what is more powerful and evocative here are the delicate and complicated interplay of people's various emotional reactions. The characters are well detailed both in terms of their back stories and their visual depictions. Take for instance this simple yet devastating scene at Anne's house. 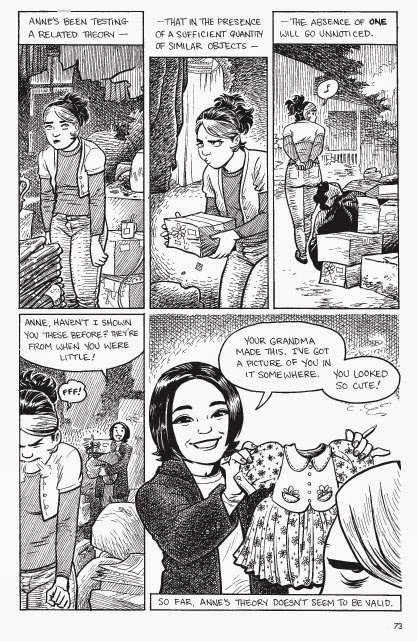 I should also add that in addition to the characters and plot that the setting and context also play large roles, almost as if they were characters in the story. The town of Failin, Oregon where this tale is set is in decline, the site of an abandoned brewery and rampant unemployment. The past weighs heavily, and long forgotten events still have a profound and unexpected impact on the present. So much is interwoven into this beautiful and compelling narrative tapestry.

The concept of interplay also applies to how this book is composed. It is one of those excellent kind of comics where the words and pictures coalesce so well and complement each other in telling this story. The background details, graffiti, and local signs are just as essential to the plot as the deft dialogue and intricate narrative. Additionally, this book oozes charm, personality, and humanity in the most beautiful ways. It is absolutely winning in execution.

This book's creators are both well accomplished for their solo works but here collaborate extremely well. Writer Sara Ryan is a full time librarian and an award winning author of young adult novels, including The Rules for Hearts and Empress of the World. She has also written a number of comics for various anthologies, including Comic Book Tattoo and Hellboy: Weird Tales. Artist Carla Speed McNeil is a Lulu, Ignatz, and Eisner Award winning cartoonist. She has been publishing her Finder comics series since 1996 and began the webcomic version in 2005. She has also illustrated a few other series, such as a run on Queen & Country, and she is editor-in-chief of Saucy Goose Press. Both creators speak about their inspirations and work on this book in this interview.

Bad Houses has received and well deserves high praise. Publishers Weekly gave the book a starred review, calling it "a drama with true depth." Time's Douglas Wolk put it on his Top 10 Best Comics and Graphic Novels list for 2013. Reading Rants described it as "a well-told and astutely drawn story of fate and forgiveness." Hillary Brown opined that it is "more than just a tale of young love and the way life opens up when you find someone who clicks. The book operates in a kind of clockwork universe, a.k.a. a small town, where everyone is connected in some fashion." Its subject matter might not be typical graphic novel fare, but it is a unique and exquisite book.

Bad Houses was published by Dark Horse, and they provide a preview and more here.

Thanks to Sara Ryan for sharing a PDF of this book with me!