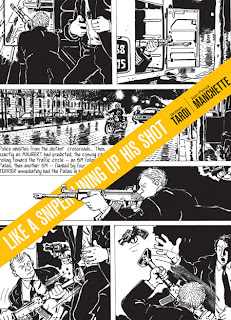 I love me some noir and I have long been enthralled with the works of Jacques Tardi, a massively influential French comics artist known for his strong lines and emphasis on realism, so Like a Sniper Lining Up His Shot seemed right up my alley. I was not disappointed. This book is an adaptation of a Jean-Patrick Marchette novel, and it contains many of the familiar tropes of the genre. The story follows Martin Terrier, an assassin on one last job before he retires. He has a shady boss, a long lost love, a troubled past, a mentor who recruited and looks after him, and of course the job goes south. He ends up on the lam across Europe, amid a growing body count, desperate for help, with little resources, and up against the long arm of the law and a band of criminals out for his blood.

Honestly, the story was perfectly fine and appropriately suspenseful, with a couple of streaks of black humor, and the ending is both poignant and delightfully bleak (I wonder if that will translate into the proposed film adaptation), but the shining star here is Tardi's art. It is raw and breathtaking. He draws the hell out of everything: cars, cityscapes, airplanes, people, action sequences, the works. Don't just take my word for it, check out these images:
Even when the book got occasionally wordy, I think the images really propelled me through the narrative. 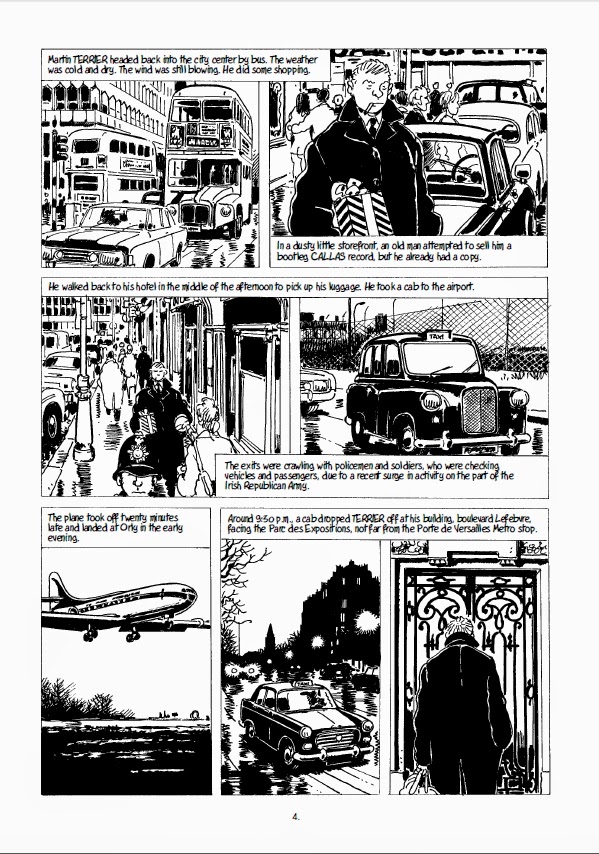 A nominee for the 2012 Eisner Award for Best U.S. Edition of International Material, this book has received much praise. The Comic Journal's Hayley Campbell extolled the virtues of the art and the stark, sleek plot, stating that the book "has a natural rawness – things happen as they happen and no almighty narrator drip feeds you morality lessons." Andy Shaw called it "dark, brutal and utterly compelling" and went on to declare that "classic thriller fans should lap this up." Tom Spurgeon wrote, "Tardi's artwork is beautiful here, although you probably already knew that. No one in comics does the frowning face better than Tardi, and Like A Sniper proves to be an absolute showcase of down-turned mouths and the unhappy people bearing them."

A preview and much more are available here from the book's publisher Fantagraphics.

Posted by Stergios Botzakis at 11:09 AM