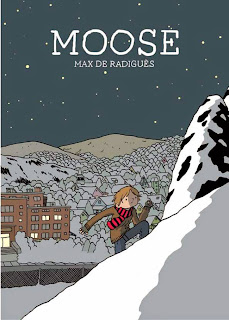 Originally published as a series of 14 mini-comics by Oily Comics, Moose tells the story of Joe, a put upon high school student who has to face a relentless, sadistic bully aptly named Jason. 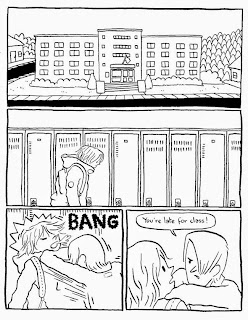 Joe goes to great length to avoid Jason, walking to school instead of taking the bus, eating lunch in closets, trying to stay out of his way, and getting detention for his troubles, but Jason goes to equally great lengths to find Joe and dish out his violence. I found those parts with their confrontations to be especially unsettling and horrific, but there is also a certain brutal realism in how this tale is paced and artistically rendered.

Sporadically, Joe finds solace from this cycle in nature, and there are a few excellent wordless scenes where we are privy to him connecting with nature and having some wondrous, if also scary, experiences. 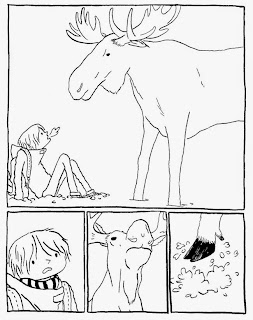 Joe fantasizes about taking vengeance on Jason, but he really does not think he has has much recourse. I don't want to spoil the way this book ends, but something occurs that gives Joe the upper hand suddenly, and how he uses this opportunity is pretty gut-wrenching. I really liked how gray everyone in this story is eventually painted, with the "good guys" not always seeming so good, nor the bad ones as bad (or at least they have their own troubles, I guess I might say). For what could easily be a two-dimensional story there is some real complexity and depth. 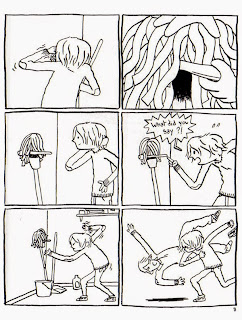 As you can tell from the excerpts, the artwork is pretty stark, with seemingly simple lines packing much emotional punch and also an economy of motion. I felt that the storytelling was excellent in heightening drama, setting scenes, and establishing personalities. Like another Oily Comic I read, TEOTFW, Moose was a visceral and moving reading experience for me.

Moose is the creation of Max De Radiguès, a Belgian comics artist who tweets updates about his works here. He was a 2009 Fellow at the Center for Cartoon Studies, and his newest projects are called Bastard and Rough Age. He speaks more about his comics work, inspirations, and creative process in this interview.

There are sparse reviews for this book as of yet, but the ones I have read have been positive. Alec Berry called it "a well-crafted, chilling read." Rob Clough praised the book, stating that "De Radigues' trembling but clear line and angular character design is perfectly matched to the subject matter." Clough also added that the "characters, though simply-rendered, are lively and bursting with emotion."

This collected volume of Moose was published by Conundrum Press. They have more info about the book here. Because of the brutal language and violence in this book, I would recommend it for mature readers.
Posted by Stergios Botzakis at 12:00 PM