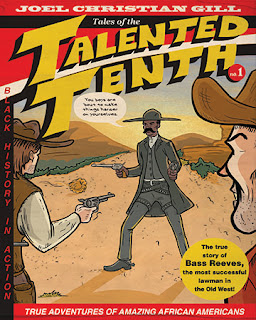 I run across new graphic novels all over the place apparently, even in the pages of my Bostonia alumni magazine. Bass Reeves: Tales of the Talented Tenth is the first part of an initiative to publish stories about obscure or neglected accomplishments of African-Americans in US history. This volume follows the exploits of Bass Reeves, an ex-slave turned US Marshall who may have served as inspiration for the Lone Ranger. For some reason, when Bass was a young boy his master felt it was better to teach him to shoot than to read. He used that shooting ability to win many contests. 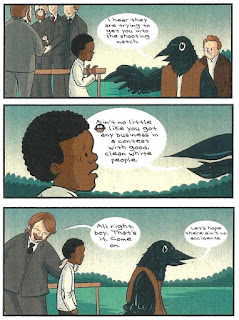 During the Civil War he escaped into Native American territory where he lived for a few years before returning as a union soldier. After wandering some after the war, he was enlisted as a US Marshall, a position in which he excelled. Me made more than 4,000 arrests over his career, including many harrowing ones described in this book. 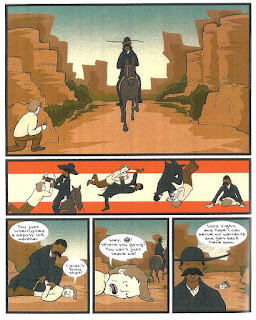 As you can see from the excerpts above, the artwork is simple and abstract, but I feel it is very pleasant and efficient in its storytelling. Actions and emotions come across very clearly, and I was caught up in the energy of the story. I also liked some of the more iconographic aspects of the book, such as the personified Jim Crow characters and the images used to stand in for racial slurs. I feel this would be an excellent resource in an upper elementary or middle school, though I am an adult and enjoyed the heck out of it. In the end, I feel one's mileage will depend on how one regards the artwork.

This book's creator Joel Christian Gill is the Associate Dean of Student Services at at the New Hampshire Institute of Art. Prior to this book he has published the graphic anthology Strange Fruit, Volume 1: Uncelebrated Narratives from Black History. He speaks more about Bass Reeves and his other comics work in this interview and also this interview.

I was not able to find many substantive reviews of this book, and the ones I found ranged pretty widely. R.C. Harvey wrote, "Gill has adopted a refined simplicity for his drawings, and he deploys the resources of the medium skillfully." Bobbi Booker called the artwork "vivid and whimsical." The reviews on Goodreads ran from very positive to pretty negative (though not always for reasons that pertain to the book itself).

Bass Reeves: Tales of the Talented Tenth was published by Fulcrum Books, and they have more information about the book here.

Later volumes in the series will focus on motorcycle pioneer Bessie Stringfield, Congressman Robert Smalls, and Union spy Mary Bowser, and I plan to keep an eye out for them.
Posted by Stergios Botzakis at 12:00 PM