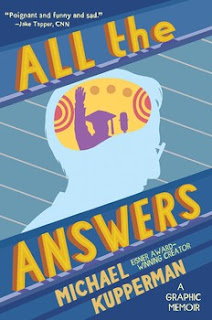 I am a big fan of Michael Kupperman's comics. Tales Designed to Thrizzle was one of my favorite series, and I adored the humor of Mark Twain's Autobiography 1910-2010. His combination of deadpan faces with absurd, surreal imagery and situations have consistently cracked me up. I even have a print of his "Are Comics Serious Literature" on my office wall. So when I learned he had a full length graphic novel forthcoming, I was jazzed. When I found out it was a serious, nonfiction work, I was intrigued even further. This book, All the Answers did not disappoint in any way. It's a fantastic, gripping, and thought-provoking work.

This book is mostly a biography of his father, Joel Kupperman, a famous child prodigy who starred on a radio/TV show called Quiz Kids. He began on the show from age 6 and became a break-out star who toured the country and met many famous people for more than a decade. He had a gift for mathematics and could do algebra problems in his head with relative ease. There was a backlash from being so familiar and appearing so perfect, not to mention pressures from being in the public spotlight for so long, and later in life he basically shut the whole episode away. Joel Kupperman went on to become a successful philosophy professor, mostly interested in exploring ethics, but he refused to engage with any part of his prior life. This situation also affected how he raised his own children, and we see the long-term effects in this book. 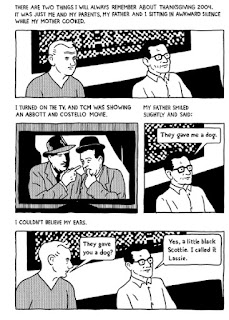 The detached art style responsible for the humor in Michael Kupperman's earlier works here plays in a much more dramatic way, communicating the detached way that the older Kupperman treated his own family. The title of the book has a double meaning, one linked to Joel's ability to always come up with the correct solution, but the second is more ironic. In the end Michael Kupperman has lots of questions about his father's life and motivations that lie unanswered. What is more, he constantly questions whether bringing all these issues into the light via this book is a good idea. In the end, this book is a meditation about families, how they relate to each other, and the roles of parents with their children. It also has a lot to say about the functions of popular culture and the early days of television. It is wonderfully provocative and affecting, an excellent biography, history, memoir, and autobiography all in one.

If you would like to learn more about Kupperman's inspirations and work on this book, check out this interview with the Comics Alternative.

All of the reviews I have read of this book sing its praises. Publishers Weekly gave it a starred review and wrote that the combination of art and text "help turn an already incredible story into an electrifyingly fast-paced, yet intimate memoir about family secrets and the price children can pay for their parents’ ambitions." Rob Clough concluded his review, "He told his father’s story as authentically as he could, but the fact that he had the guts to admit that this didn’t lead to a magical catharsis doesn’t puncture a hole in the narrative; it simply grounds it in reality." Greg Hunter called it "a brave piece of storytelling."

All the Answers was published by Gallery 13, and they offer more info about it here.
Posted by Stergios Botzakis at 12:00 PM