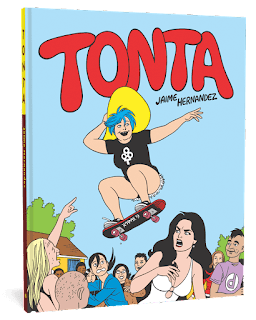 Long-time readers of this blog should know that Jaime Hernandez is a living legend and one of my favorite comics creators. He has won multiple Harvey and Eisner Awards for the long-running Love and Rockets series he co-created with his brothers, and I loved seeing his work in various anthologies over the years. Last year he also ventured into the arena of children's comics with The Dragon Slayer.

This book, Tonta, gathers together material published a few years ago in Love and Rockets: New Stories. For the most part, these stories focus on the titular Tonta (her nickname, Spanish for stupid or dummy), a teenager who tries to fit in the best she can. Her family is sort of a mess, with a network of older half-sisters and a half-brother who occasionally nose into her business. Also, her mother seems to be a black widow sort, leaving a trail of exes who have been suspiciously murdered. That last bit entails a prolonged legal drama that is woven throughout the book. 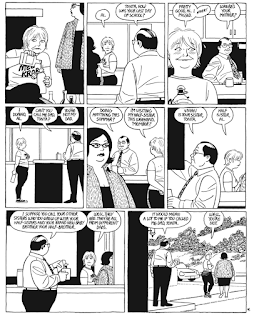 As you can see, Tonta also does typical sorts of teenager things, like sneaking booze, hanging out with people she shouldn't, hiding out in the woods with her clique, and cozying up to members of her favorite band. She is not always successful with her intentions, or come off the coolest, but she is a dynamic and expressive character. That is what I perhaps appreciated most about this book. You do not necessarily need to know a lot of background to catch on to the multitude of things that go on. Each character is defined and memorable. Each episode is powerful and economically communicated, and it is very easy to get swept up in the narrative flow. This book is yet another testament to Jaime Hernandez's incredible artistic and storytelling chops.

The reviews I have read about this book have been very positive. Publishers Weekly concluded, "This rambunctious ride may be more minor in the Hernandez catalog, but it’s still a master class in cartooning." Hillary Brown commented in a similar vein, "It seems like the abiding conception of Jaime Hernandez’s Tonta is that it’s a minor work of his, a sort of tossed-off compilation of stories focusing on a character who’s more an Io than a Jupiter, a character actor rather than a leading lady. But the fact is that reading it, for me, produced the same rush of blood to the brain and almost dizzying happiness as his “major” Maggie and Hopey stories."

Tonta was published by Fantagraphics, and they offer a preview and more here. This book features some profanity and nudity, so it is suggested for readers mature enough to handle those things.
Posted by Stergios Botzakis at 12:00 PM