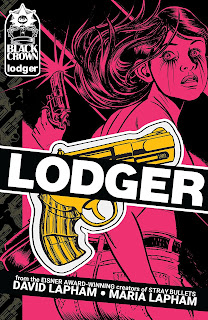 Originally published as a 5-isse series, Lodger is a piece of awful business. It portrays two horrible, broken people who are on a collision course that one won't survive. The first is Ricky Toledo, a troubled woman whose life was rocked when she was 15. At that time, a handsome drifter named Dante ended up in her house renting a room. He had an affair with her mother that ended in violence, her mother's death, and her father's imprisonment. 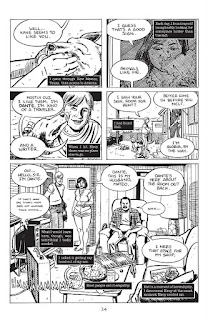 Years later, Ricky is armed and on the search for that drifter, whose name is decidedly not Dante. He is "the Lodger," an itinerant serial killer who is a master of disguise, likes riding buses, and writes a travel blog about his exploits in veiled manner. Ricky wants revenge, and the result is a wicked game of cat and mouse, which turns out to be more like a game of "cat and cat."

This book is a testament to excellent graphic storytelling. The plot is intricate and hinges not only on a taut narrative but also frequent clues and images communicated through the artwork. The stark contrast in the black and white artworks lends a documentary aspect to the story, and reading the book is like experiencing some nasty, true-crime tale unfold before your eyes. Even though the subject matter here is dark, it is easy to admire the craft that went into telling this story. This book is grisly and ugly sometimes, but it is always compelling and gripping. The Laphams revel in beautifully rendering horrible things.

David and Maria Lapham are best known for their Eisner Award-winning series Stray Bullets, which has been published off and on in different incarnations since 1995. That series typically deals with crime related stories, but in a very human way. David has worked for lots of different comics publishers and is also known for the Vertigo series Young Liars, about a group of 20-somethings with disturbing secrets.

The reviews I have read of this book praise it, though they also tend to note the niche audience for this tale. Andy Oliver praised the book and  wrote, "Lapham’s crisp, clean and yet fluid art transitions between the drama of densely packed, moody set pieces and close-ups, and sudden, open moments of destructive energy." Jonathan O'Neal spoke to the density and atmospheric qualities of the book and noted, "but if you can show patience and the willingness to give yourself over the these characters, you will ultimately be rewarded." Derek and I discuss the first two issues of the series here.

Lodger was published by Black Crown, an imprint of IDW. They offer a preview and more here. Because of violence, profanity, and sexual content, I recommend this book for mature readers.
Posted by Stergios Botzakis at 12:00 PM