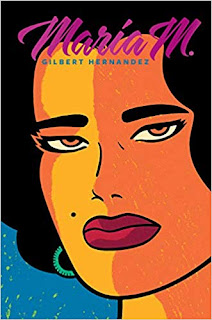 If Maria M. were a movie, it'd be more than three hours long and with an ending that would put Scarface's to shame.

You know what's crazy? How fast time goes by. The first half of this book was published in 2013, and I wrote a review of it here. I have to say that looking back at my past reviews often makes me cringe a bit, but I think that one is pretty well composed and captures what I still think about this book. So go check it out. The only thing I could not say then but can now: Gilbert sticks the landing, and there is a lot of blood along the way. Whereas the first half of the book is a story of an immigrant trying to find her way in a sleazy world, the second half is more a concentrated crime drama with lots of intrigue and double-crossing.
This book is an excellent one, showcasing an accomplished creator's range of skills in fine fashion. There is so much plot packed in the visuals, it's a testament to economical storytelling. It's a good read for those unfamiliar with his work or his Palomar tales, but it's also highly rewarding for readers who have been enjoying those comics over the years as well. The only people I cannot recommend this book for are younger ones, as it features sex, violence, and profanity. But if you are mature enough to handle those things and enjoy a gruesome crime tale that pays tribute to classic exploitation/B-films, this book is right up your alley.

This book's author is Gilbert Hernandez. He has been creating comics for about four decades now, most notably the Love and Rockets series with his brothers. He is prolific and considered one of the great American comics creators of all time. He talks extensively about his life and works in this interview.

All of the reviews I have read of this book have been positive. Publishers Weekly wrote that "the pulp plot is executed with style, strong and sensitive character development, practiced casual linework, and the kind of gonzo weirdness—such as Maria’s talent for cracking walnuts with her abs—that defines the Hernandez ethos." Andy Shaw opined that "anyone else with an interest in sharp, sexy, violent but sophisticated stories can still enjoy it for what it is: a B-movie homage that takes the genre above and beyond our expectations." Robert Rea summed up, "Every writer should be so lucky to have the imaginative chops that Hernandez shows in Maria M."

Maria M. was published by Fantagraphics, and they offer a preview and much more here. Also, the publisher is having their big annual Black Friday/Cyber Monday sales soon, so check those out. They publish lots of excellent books!
Posted by Stergios Botzakis at 12:00 PM