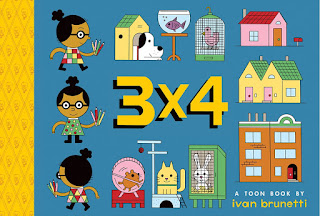 When I survey the range of graphic novels out there today, I am amazed at the sorts of titles and topics they cover. Except when it comes to mathematics. Math is the one area that is apparently very difficult to translate into comics, and that is one reason why this book, 3x4, is noteworthy.

The premise in this book is a homework assignment where the students have to draw sets of 12. The amounts of sets and items is up to them. They can draw one set of 12, two of six, three of four, or four of three. I know that the author uses this exact assignment with adult art students, but it also works for teaching younger children about counting, multiplication, and elementary factoring. And the children take the assignment to heart, expressing their interests through their drawings. 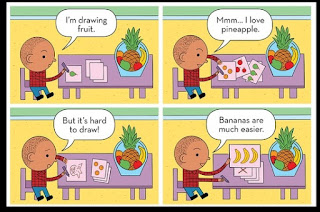 A lot of the fun of this book shines through the drawings. It is full of simple figures and backgrounds rendered in geometric shapes and in vibrant colors. My 2-year-old love reading this book, pointing out all of the items that appear in the sets. He also likes to tell me whether we can eat them or not, but I think that means that the items themselves appeal to young readers and also that the illustrations are just that visually appetizing. Fans of the book Wordplay, which I reviewed earlier this year, will also be glad to see Annemarie return and play a prominent role here. This book has the illusion of simplicity, but it is elegantly complex and works on many different levels.

This book's author, Ivan Brunetti, an artist and educator who has been working in comics for a few decades. Currently an associate professor at Columbia College Chicago, he has done multiple covers for The New Yorker and created all kinds of solo work, including lots of independent comics and lately a growing number of titles for younger readers like Comics: Easy As ABC. He speaks about his work on 3x4 in this interview.

All the reviews I have read of this book have been glowing. In a starred review, Kirkus Reviews summed up, "So exemplary an execution of a simple concept that it can be read multiple ways—as multiplication, counting, sorting—without sacrificing fun." In another starred review, Publishers Weekly concluded, "As the characters work through the multiplication concept on their own terms, readers are sure to arrive at a clearer understanding." Kelley Gile gave it another starred review, calling it "a lovely graphic story that teaches a simple concept in a most engaging way."

3x4 was published by TOON Books, and they offer a preview and more here.
Posted by Stergios Botzakis at 12:00 PM