Astronauts: Women on the FInal Frontier 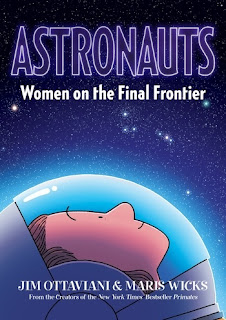 Jim Ottaviani and Maris Wicks are two of the best graphic novel creators who work in the arena of science. They collaborated years ago on Primates, which is one of my favorite books about biology, and here they combine forces again to chronicle the history of women and space flight. They chose to do it through the eyes of Mary Cleave, a veteran of two Space Shuttle flights, which I think gives the whole enterprise a specific and detailed account that makes everything more personal and engaging, even funny at times. 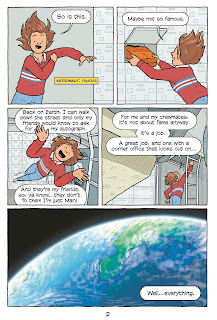 Cleave was involved for a good while with NASA, and so she had all sorts of information about the prerequisites for being an astronaut, the laborious application process, and the intense training program. Along the way, we are privy to info about how astronauts go to the bathroom in space, how they eat, and how they learn to live together in the confinements of their vehicles. I really like how the science here is well balanced with mundane features of space travel. And I got a good look into the workings of the Space Shuttle program as well.

Those looking for general information about women astronauts will also not be disappointed. Even with all the specificity, this book is chock full of other information, including a look at the Soviet space program and Valentina Tereshkova, the first woman to go to space (in 1963!). It took a long while for the US to involve women as astronauts in the space program, mainly due to sexism and relatively few women trained as pilots or engineers. And we get insight into this era also.

The artwork is very attractive and colorful. This book features strongly rendered characters as well as lots of technical details. Emotions shine through well, and we also get to see all the buttons, gadgets, and other doo-dads in clear fashion. It is a substantive and entertaining book that I could see being used for lots of purposes, in a classroom as well as for a free reading choice for the science-curious.

In addition to their collaboration on Primates, these creators have a sizable corpus of science-themed books. Ottaviani has written a number of great graphic novels about scientific inquiry including ones about the early days of paleontology, the space race, physicist Niels Bohr, women science pioneers, and the biographies Hawking and Feynman. Wicks tends to focus mainly on biological topics like Coral Reefs and Human Body Theater.

All of the reviews I have read of this book have been glowing. It received starred reviews from Kirkus Reviews and Publishers Weekly. KR summed it up, "Exhilarating—as well as hilarious, enraging, or both at once depending on the reader." PW remarked positively on Cleave's "colloquial storytelling, humorous observations, and asides are highlights—Wicks and Ottaviani skillfully capture Cleave’s infectious enthusiasm up to the last page." Corey S. Powell wrote, "Its only real shortcoming is that the book leaves you wanting more; fortunately, it ends with a helpful bibliography and list of resources."

Astronauts was published by First Second, and they a preview and much more here.
Posted by Stergios Botzakis at 12:00 PM