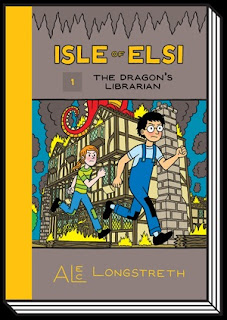 I am going to be brief: The Isle of Elsi was a delight to read. I have not read such a fun book in a while. It features puns, clever word play, a weird wizard, a feisty dragon, and a plucky protagonist who just won my heart. Even the two young Mulch brothers who bully him and steal his lunch (when he remembers to bring it to school) turn out to be interestingly nuanced characters. I am so glad that I heeded whomever's Tweet I read that suggested this book. It was so much fun. Go buy it now. Or go check out the webcomic version and then go buy this volume. It's totally worth it. 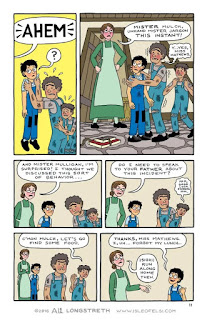 The plot revolves around a boy named Rex Jargon, Jr. or R.J., Jr., as he likes to be called (palindromes are a common theme in this book - just check out the title). He has a penchant for puns that gets him in trouble at school and also gets him fired from a job he really needs. Ten years ago, his father left on a quest to stop a dragon from destroying their town. He was apparently successful, but mysteriously never returned. In his absence, the town declared him a hero. However, when this book begins, the dragon returns, and R. J., Jr. takes it upon himself to vanquish it and also learn what happened to his dad. His quest takes him to all sorts of strange places, and the way that he eventually solves these mysteries is clever and wonderfully fulfilling.
The artwork in this book is clear and colorful. Characters' emotions and reactions are fantastically rendered, and the action is well paced and suspenseful. I also appreciated the preponderance of wordplay that complements the artwork and makes the whole enterprise joyful and entertaining. I am looking forward to following R. J., Jr.'s further adventures as well as future volumes in this series.
This book was created by Alec Longstreth, an Ignatz Award winning artist. He's created a few series and comics, most notably the autobiographical Phase Seven Comics. He speaks about his works and career, including the beginnings of the Isle of Elsi in this interview.
All of the reviews I've read of this book have been full of praise. Sean and Derek called the webcomic "one of the most best place to order levitra online impressive that they’ve discussed on the show," and added, "Not only are the art and storytelling top-notch, but the design of the website is a big draw, as well." Heidi MacDonald wrote, "The writing is a bit sharper than the art, but it all goes together in a delightful way."There are more reviews at Goodreads, where the book has a 4.70 (out of 5) star rating as of this writing.
The Dragon's Librarian was published by Phase Seven Comics, and there is a preview and more info about it here. Current episodes of the webcomic can be found here. And you can also check out his Patreon page and give him some support.
Posted by Stergios Botzakis at 12:00 PM