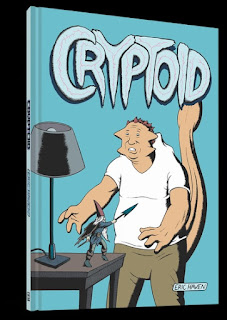 Cryptoid features some wonderfully weird comics presented in a stream-of-consciousness style. The stories begin with a looming figure that resembles a Celestial from Jack Kirby's The Eternals. As it surveys the Earth its gaze leads to the misadventures of the half-man, half-ankylosaurus Mankylosaurus (seen on the book cover) grazing at a salad bar, and later turn to a tangent on unknown species of bats that live among us. 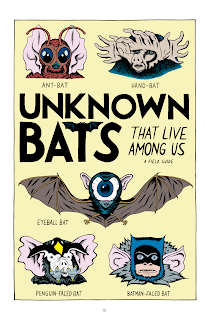 Next comes a brief tale of a tortured man who is transformed into a gnome, followed by the adventures of The Resister, a woman/eagle creature who superheroicly fights for freedom, impaling Steve Bannon on a fence and vomiting fish guts at President Trump. 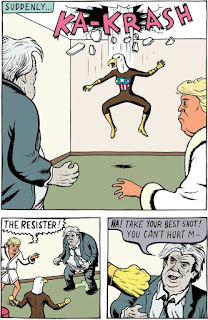 The enigmatic Nightsword's exploits then appear, with the heroic knightly figure slashing and dancing in reality-altering ways. Box, a robot, then comes on the scene to go shopping in a supermarket in his unique manner.

A giant monster then rises from the sea and begins crushing the Earth, when the Mankylosaurus and Celestial-looking being return and the story comes full-circle.
There is a surrealism I dig about these comics. None of the tales are very long, and some are played so seriously that they come off as silly, but they are all potent doses of comics goodness. I am not saying that this book is for everyone, but it boasts a great combination of artwork inspired by classic comics artists like Kirby and Wally Wood, a dash of contemporary social commentary, some good old fashioned ennui, monsters, strange juxtapositions, and frivolity. It's a memorable bit of inspired madness.
I am a big fan of this book's creator Eric Haven. His comics are memorable, leaving definite impressions with their powerful artwork and brevity. His stories do not wear out their welcomes. His narrative sensibilities and style remind me of Michael Kupperman's, though Haven is more action and genre oriented. He has a slew of comics under his belt, including Tales to Demolish and The Aviatrix (collected in Compulsive Comics) and his books Ur (nominated for an Eisner Award) and Vague Tales.
The reviews I have located about this book have been positive. Chris Gavaler called it "a hybrid graphic novella that belongs to no genre but his own." Ryan Carey wrote that "there’s no mistaking an Eric Haven comic for a comic made by anyone else, and even if his work largely amounts to variations on a theme, it’s a theme that stands up to constant and further exploration, definition, and expansion."
Cryptoid was published by Fantagraphics, and they provide a preview and more about it here.
Posted by Stergios Botzakis at 12:00 PM