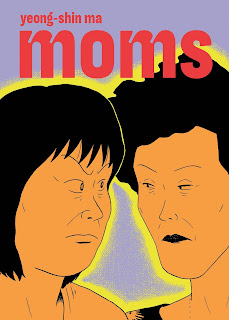 Moms is a unique book, a look at the lives that are not often highlighted in popular culture or media. The main characters in this book are Korean women in their 50s, and they are a motley bunch. The protagonist of this book is Lee Soyeon, who divorced her husband years ago because of his gambling addiction. Now, working on a custodial staff in an office building she questions her life choices. Her 30-something-year-old youngest son still lives with her and struggles to make a living as a musician. She dates a skeevy nightclub waiter who only seems to come over for late-night, drunken hook-ups. And she has to contend with poor working conditions and sexism at work, which leads her on a misguided attempt to unionize. Over the course of the book, she also hangs out and commiserates some with her friends, but they have their own issues, ranging from having impotent husbands to seeking out affairs with younger men to simply losing the desire to even socialize at all. 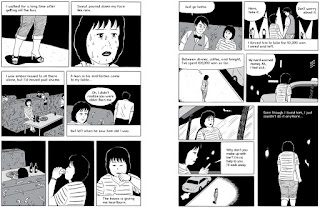 The candor of this book is one of its greatest selling points. There is an aspect of voyeurism at play with gaining such insight into these women's lives, especially when their desires for  love, sex, and money are laid pretty much bare. I found the book very engaging and impossible to put down while also being somewhat horrified by what they had to endure over the course of their days. Plus, much of what transpires has a darkly humorous edge. It is very much like a soap opera, only with real stakes and real pain. I don't think this book will be quite to everyone's liking, but it's a memorable and moving work about resilient women. It portrays mundane lives that become extraordinary in the telling.

This book was created from his mother's notes by Yeong-shin Ma, who has published 11 books in South Korea. Moms is his only book available in English, and it was translated by Janet Hong. He speaks about his work on Moms in this interview.

The reviews I have read of this book have been predominantly positive. Rachel Cooke called it "a remarkable, joyous book," adding, "Our culture, like his, is hell-bent on rendering middle-aged women invisible, and yet here are four of them, their lives not only filling every single page of this comic, but brought to us with such intimacy." Susan Blumberg-Kason opined that "Yeong-shin Ma writes with great sympathy of the struggles of these middle-aged women, portrayed as humans and not caricatures." In a less celebratory review Publishers Weekly commented that "things tend to drag on, and the narrative feels as repetitive Soyeon’s declaration that her 'standards are high.'"

Moms was published by Drawn & Quarterly, and they offer a preview and more information here. By now, you may have guessed that this book contains lots of mature themes and is meant for mature readers.