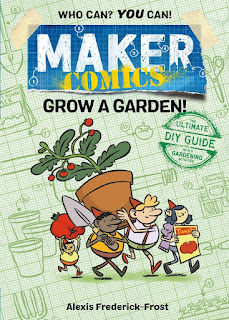 Happy 2021! It's a brand new year, and some people like to take this time to do something new with their lives. For instance, you might want to do something productive like take up gardening. Well, luckily for graphic novel fans, the Makers Comics series has got you covered. Grow a Garden! has all sorts of helpful insights on how to begin a garden, both inside and outside, with directions on how to plant specific crops, set-up an indoor lighting system to foster seedlings along during weather, and tips on how to compost and create your own rich soil. Overall, I think it's a handy introduction to the rudimentary aspects of gardening. I certainly learned a bunch from it, most notably the need to pay close attention to the specific needs of specific plants. 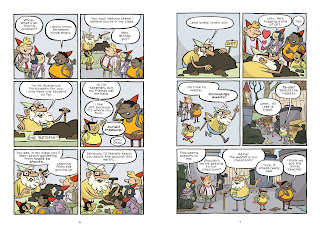 As you can see from the excerpt from the opening of the book, the artwork is clean and attractive, a style that is cartoonish and inviting to read. It also feels like a book aimed toward younger readers, as a sizable aspect of the book also focuses on setting up the book's premise, namely that there is a bunch of students learning about agriculture at Garden Gnome Academy. I think this premise is clever, but I also feel that it is overly developed for a book such as this. A lot of space goes toward crafting a narrative where the apparent nebbish, instructor Mr. Butternut, is in actuality a superhero named Captain Compost who eventually saves the school from the schemes of fellow teacher Mr. Thorn and his mad experiments with carnivorous plants. In (too?) clever fashion, the students spent a lot of the downtime waiting for plants to grow by reading Captain Compost comic books, so the reveal is a big surprise.

I  enjoyed reading and learning from this book , and I don't want to poo-poo its whimsical narrative, but I also think it could have used some streamlining. There are a number of places where I think text dominates the narrative flow, and I can't help but wonder if some of the superhero/fantasy story could have been pruned in the interest of delineating more visual directions for gardening.  I have read many books in the various nonfiction series that First Second publishes, and this volume just seems to not maximize its potential for being informative. It is charming, but I also feel that its premise sometimes detracts from its content. The combination of fiction and nonfiction is not harmonious.

This book's creator Alexis Frederick-Frost is best known for his work on the Adventures in Cartooning series, and he's no stranger to fantasy comics aimed at younger readers.

The reviews I could locate about this book often express disappointment. Johanna Draper Carlson concluded, "All this background material means we don’t get to see the gnomes actually grow or harvest much of what they start. Just as the part I’m interested in is beginning, the book ends. Instead of seeing the outcome of a successful garden, we get a superhero battle out of nowhere. I also hoped that there would be more information on fixing or avoiding problems with plants, but there are only a couple of pages on how to recognize when something’s wrong." Melissa McCleary wrote, "Overall, this installment of the series fails to meet its basic goals of both educating readers and presenting an enticing story; the structure ultimately cancels both out."

Grow a Garden! was published by First Second, and they offer a preview and more info about it here.