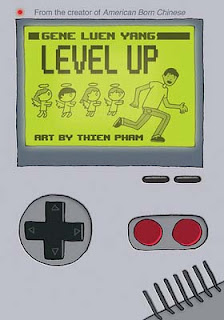 This book is dedicated to the creators' brothers who became doctors. The dedication is apt because Level Up is about the pressure some children feel to live up to their parents' expectations. Dennis Ouyang, the protagonist, fell in love with video games at age 6, but he was never allowed to play them or get an allowance to squander on arcade games. His father tells him that he will have to "eat much bitterness" in this life, especially because he wants his son to become a doctor. Dennis hints for months that he wants an NES for his birthday, but instead gets a chemistry set. After his father dies, he throws himself into gameplaying, which wreaks havoc on his grades. Threatened with expulsion from college, he is visited by four angels who intervene. Eventually in med school, Dennis finds himself questioning if this is the career path for him.

As with Yang's other works, this book blurs the lines between fantasy and reality in a magical realistic manner. Metaphors about religion and life mix with video game images and conventions in surprising and almost logical fashion, making for a narrative that is compelling in multiple ways. The ambiguity and uneasy feelings that come from growing up and figuring out what to do with one's life are portrayed masterfully. At times, friendly faces seem sinister and vice versa. Pham's art is deceptively simple looking, but conveys much emotion and meaning. Although it does not pack the wallop of American Born Chinese, Level Up still pays off well as an expressive story.

This book is a collaboration between writer Yang and artist Pham. Gene Luen Yang is an educator and an established, award winning graphic novelist who has published American Born Chinese, The Eternal Smile, and Prime Baby. Thien Pham is a high school teacher and an up and coming graphic novelist. He has few other credits as yet, but he has a forthcoming solo graphic novel called Sumo set to be released in December. This article touches on both creators' work on this book.

Level Up was selected a New York Times Notable Children's Book (Young Adult) for 2011. Reviews I have seen thus far have been on the positive side. Nicole Wong remarked on the strong manner the book conveys meaning visually, "Complex relationships and personalities are sketched out with subtlety and nuance, through meaningful hand-drawn facial expressions and blank contemplative framed pauses." Mark Flanagan called the book "good" but not great and wrote that it "is a well-illustrated and universally appealing story, however I would like to have seen Yang delve more deeply into Dennis’ relationship with his medical school friends." Kirkus Reviews summed it up as "A piquant, multilayered coming-of-age fable for the wired generation."

A preview and multiple other resources are provided here by Yang. The book's publisher, First Second, provides more resources and information, including reading group and discussion guides, here.
Posted by Stergios Botzakis at 12:00 PM