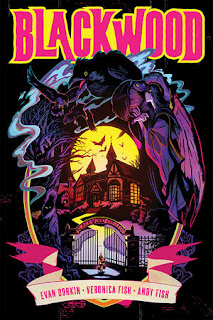 Blackwood is a fun book, if you are into tales of horrific, otherwordly creatures trying to break into our world to devour and subjugate all of humanity. It is about four misfit teenagers who have been recruited to attend Blackwood College. Nothing seems to unite them except series of strange life experiences and some ability to either perceive or interact with supernatural entities. Campus life is eerie and weird, and soon everything escalates into an apocalypse-level event. The four motley teens need to find ways to unite their abilities in order to figure out what is happening and also save the world. 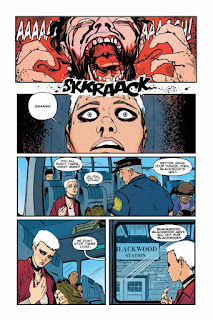 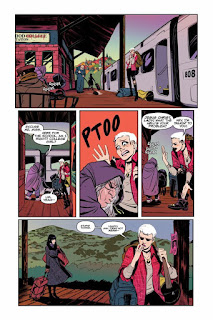 This book had a pretty interesting mystery that unfolded in intriguing and gruesome ways. The characters are more types who do not have much space for development, but they are sympathetic in the same way teens trying to survive 1970s/1980s horror movies were. The book had some cool features along the way, including professors trying to decipher arcane texts, a two-headed chimp mummy, giant mutated insects, and people infested with inter-dimensional tentacle beings. It was a fun read, and I think it ended in a satisfying way that also leaves things open for a sequel that will be published next year. I know I'm looking forward to seeing more stories set in this world, which is well detailed and has a lot of possibility for more grotesque supernatural hi-jinks.

Originally published as a 4-issue limited series, Blackwood was a collaboration between writer Evan Dorkin and artists Veronica and Andy Fish. Dorkin is a multiple Eisner Award winner most known for writing Beasts of Burden, but I am also partial to his work as writer/artist of the series Dork and Milk and Cheese. Veronica Fish is a painter who has done a lot of different work for Marvel Comics (Silk and Spider-Woman) and Archie Comics (Sabrina the Teen-Aged Witch and Archie). Andy is Veronica's husband who did the coloring artwork here and has worked on a variety of other comics, including ones about Batman and urban legends. All three creators speak about their work on this series here.

All of the reviews I have read about this book have been positive. Forrest Hollingsworth called it "one of my favorite horror comics of the year." Dustin Cabeal wrote, "To have a book that’s entertaining, horrific and enticing makes Blackwood a comic no one should miss." Joe Grunenwald opined, "Dorkin, Fish, and Fish are at the top of their game here."

Blackwood was published by Dark Horse, and they offer a preview and more about it here.
Posted by Stergios Botzakis at 12:00 PM