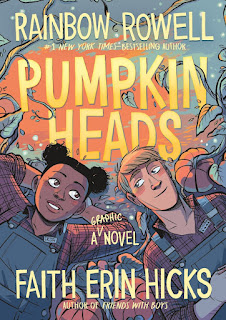 Pumpkinheads is a lighthearted but insightful look at a couple of older teens growing up and figuring out who they are. Josiah and Deja are two high school seniors working their last fall at their local pumpkin patch, and they are a pair of opposites. Josiah is a straight-arrow, shy, and has been named MVPPP (Most Valuable Pumpkin Patch Person) almost every month he has worked there. Deja is more outgoing and brash, and she decides that on their last night that Josiah is going to finally talk to Marcy, that girl he's been mooning over for years. She cajoles him to leave their regular post, and they gallivant across the pumpkin in a quest for delightful treats and for him to maybe actually go on a date. It's a night for throwing caution to the wind, she says, and Josiah reluctantly agrees. 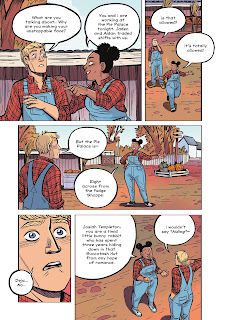 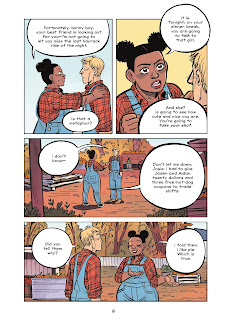 What follows is a cheerful and funny trip across a pretty fantastic pumpkin patch, with lots of interesting attractions and delicious sounding food. Also, they run into a number of Deja's exes in their sojourn, which makes for some discomfort and humor. Marcy proves elusive to find, as she is pretty mobile and apparently acting as a sweeper. These misadventures give Deja and Josiah lots of time to talk, revisit their past relationships, and reflect on their four years together at the pumpkin patch.

I loved spending time with these characters. Josiah is responsible but clueless in many ways, while Deja is passionate and perceptive, and I appreciate getting to see their dynamic in action. Over the course of the book, they figure out some things about their lives and themselves, and it's a sweet tale. Moreover, there's lots of great banter, and their personalities come across in powerful, relatable fashion. This book might not feature heavy subject matter, but it is a wonderful amusement with excellent character work.

Both of this book's creators, writer Rainbow Rowell and artist Faith Erin Hicks, are highly accomplished in their fields. Rowell is a novelist known for her best-selling books Eleanor & Park, Fangirl, and Wayward Son, as well as for writing the latest version of Runaways for Marvel Comics. The Eisner Award winning Hicks is a graphic novelist who has created some of my favorite books over the past decade, including The Nameless City trilogy, The Adventures of Superhero Girl, and Friends with Boys. Both creators speak about their collaboration on Pumpkinheads in this interview.

All of the reviews I have read of this book have been glowing. In a starred review, Kirkus Reviews summed it up, "A heartwarming, funny story filled with richness and complexity." J. Caleb Mozzocco wrote of the collaboration, "Pumpkinheads simultaneously feels a lot like a Rowell work and a lot like a Hicks work, and it synthesizes the virtues of each half of the creative team in the process of telling a light-hearted but touching teen romance." Karina Yan Glaser wrote that it "is more than a story about a last evening at a beloved pumpkin patch; it is about being confident enough in a friendship to speak both challenge and truth — even the truth that makes you feel vulnerable, but could set you on a new, rewarding path."

Pumpkinheads was published by First Second, and they offer a preview and much more here.
Posted by Stergios Botzakis at 12:00 PM