Nobody's Fool: The Life and Times of Schlitzie the Pinhead 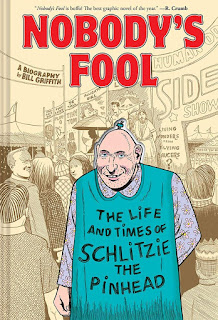 Bill Griffith has been making comics since 1969, and he was involved in producing a number of underground comix. A few years ago he published Invisible Ink, his debut graphic novel, a history about his mother and an affair she carried on with a famous cartoonist. But he is best known for his long-running syndicated comic strip Zippy the Pinhead, with its serial title character and catchphrase, "Are we having fun yet?" This book, Nobody's Fool: The Life and Times of Schlitzie the Pinhead, is about the unlikely inspiration behind Zippy.
Schlitzie was born in 1901 and originally named Simon. He had a uniquely shaped head (the technical term for it is microcephaly) and some sort of intellectual disability. When he was 8 years old, his parents sold him to a sideshow manager, beginning a long career as a "freak" to be observed at various venues across the country as a "pinhead." He was almost always presented as a female, dressed in a muumuu or hairshirt, and attributed to either a lost civilization, like the Incas or Aztecs, or proposed to be a man/monkey hybrid. Behind the scenes, Schlitzie almost always had a pleasant disposition. His new family of fellow performers looked out for him, and he got to do things he loved, like eat hot dogs or fried chicken and wash dishes. 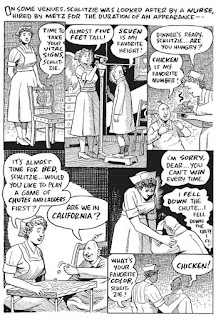 Schlitzie even appeared in a couple of motion pictures, most notably the MGM-produced Freaks, directed by Tod Browning, notorious as a cult/midnight movie since its 1932 debut. A good chunk of this book deals with recreating the film and its creation in comics form. Eventually, when attitudes towards displaying disabled peoples changed, he was institutionalized, which crushed his spirits. Only a chance encounter with an off-season sword swallower made an opportunity for him to be released, which led to better circumstances until his death at age 70.
This book is noteworthy on three fronts. First, it is a moving portrait of a unique individual. Second, it contains a good amount of hard-won research. Certainly, not much information existed about the life of Schlitzie in any one place, and the fact that Griffith was able to cobble together so much is impressive. Third, part of this book is his story, but it also acts as a history of side shows and carnivals in the 20th century. There is so much detail in terms of the various locales, the signage at the sideshows, and specific moments. I know I was alternately charmed, moved, and surprised at what I was learning from this book. It is a clear labor of love.
All of the reviews I have read of this book have been positive. Kirkus Reviews called it "A tender biographical tribute to an artist’s inspiration." John Seven wrote, "Griffith renders the 70 years of Schlitzie’s life with a vivid affection for the areas and landscapes he inhabited, for the cultures he wandered through, and for Schlitzie himself." In a starred review, Publishers Weekly concluded, "Much like in Freaks, the revelation found in this illuminating work is that the true monsters are the 'normal' people who line up to laugh at or abuse Schlitzie."
Nobody's Fool was published by Abrams, and they offer a preview and more info about it here.
Posted by Stergios Botzakis at 12:00 PM