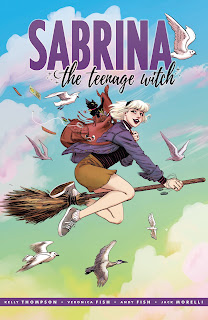 I grew up reading a lot of Archie Comics, and I have a soft spot for those characters. In the recent decade, Archie has been doing a lot of work to update these characters, bringing in some high caliber creators to do so. Although Sabrina the Teenage Witch has never been one of my favorite titles, I am very taken with the creative team here, especially writer Kelly Thompson and artists Veronica and Andy Fish. I have to say that this series delivered some top notch entertainment.
This series, originally published as 5 issues, has everything I want from a Sabrina comic: high school drama, mysterious monsters, moments of genuine suspense, magic, modern-day witches, and a snarky, talking cat. 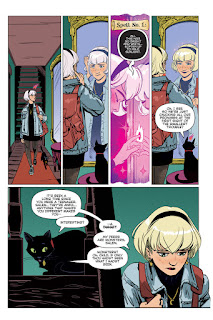 It even kicks some of these features up a notch, but I won't spoil things here by saying how. Suffice it to say that Sabrina is the new girl at Greendale High School, which attracts some wanted attention from a couple of love-lorn boys, Harvey and Ren, as well as unwanted attention from mean-girl Radka. As Sabrina settles in, makes some friends, and gets acquainted with high school life, she also finds herself the target of attacks from magical beasts that roam not only the woods but the high school. Unraveling this mystery detracts from her academics, but when her aunts get involved Sabrina finds she has to bail them out as well.
As I wrote earlier, I love this creative team, and they bring so much to this book. Thompson writes lots of clever dialogue but also spins a compelling mystery/horror plot with style. The Fish art team creates ambiances that suit the humor/drama of high school while also portraying some frightening beasts and appropriately spooky magical events. The coloring also plays a big part in creating appropriate tones that make the artwork dazzling. This book was thoroughly entertaining, and I recommend it for fans of YA horror or supernatural fantasy.
Thompson has written a bunch of comics series for various publishers over the past few years, and some of my favorites include Hawkeye, West Coast Avengers, Captain Marvel, and Nancy Drew. Veronia and Andy Fish have collaborated on a number of comics projects, including a few other Archie series and the horror series Blackwood. Thompson talks about her work on this Sabrina series in this interview.
Reviews I have read about this book have been generally positive. Nick Smith called it "an excellent restart to this classic series." J. Caleb Mozzocco wrote, "Thompson and artists Veronica Fish and Andy Fish are telling what is basically an adventure comic, with character-driven humor, drama, and yes, plenty of cool-looking monsters, but never so much of any of those elements that they threaten to overwhelm the comic and push it into another genre." Oliver Sava opined, "There’s a lot of potential in this new take, but also room for improvement."
Sabrina the Teenage Witch was published by Archie Comics, and they offer a preview and more here. A sequel series titled Something Wicked has recently been published.
Posted by Stergios Botzakis at 12:00 PM