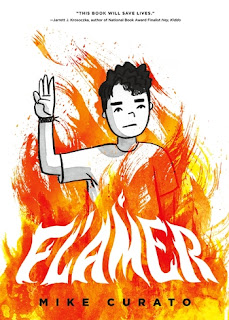 Flamer is a book about personal turmoil. The main character here is Aiden Navarro and he is wrestling with a lot in his life. He gets grief from people because he is part-Asian. He is anxious about his transition from parochial to public school, as he's decided to make that move as he is entering high school. He is also at summer camp, a place where he's sent partly to be active and lose some weight, which also weighs on his mind. He finds that he relates much easier to his female friends, so he feels isolated by the often toxic masculinity of his peers. He gets teased and taunted pretty consistently, and he finds solace with his bunk mate Elias, a football player who is actually a cool guy who is kind to him.

Aiden's relationship with Elias adds more confusion to his mental state and makes him question his sexuality. On one hand, he feels good to have a person who is actually friendly to him but on the other hand he has feelings that confound him. As a devout Catholic and altar boy, he reasons that he could not possibly have such feelings, because he has always been a "good" person. Aiden also has an affinity for X-Men comic books, and his favorite character is Jean Grey. He can relate to her shift from being a hero to the villainous Phoenix, and, in a sinister twist, he begins to wonder if he should do what she ultimately did in order to put matters to rest.

As you might tell from my synopsis, this book trucks in some major life themes. It is about a person's search for self, dealing with religion as well as social institutions that both define and restrict people. It is also a deeply thoughtful and personal book, and I found it very easy to relate to and feel for Aiden. The struggles of a middle/almost high schooler are palpable as well as his travails with bullying. Even so, I like how he's portrayed so that he's no saint, but trying very hard to make sense of some very disparate ideas and beliefs. His struggle is literally life and death, and I was gratified to see this all-too-common but hardly spoken-about conflict is given such thoughtful, relatable, and realistic treatment.

The artwork, which is rendered in black and white for the most part, save for a number of instances where oranges, yellows, and red flash across the page to indicate or moments of heightened emotion, covey so much emotion and feeling through spare imagery. There is much to relate to or cringe from, from moments where Aiden recoils into himself because of casual cruelty or overt abuse to other scenes where he can find security through dark and self-deprecating humor.

In an afterword that follows the story, Mike Curato admits that some of this story is based on his own experiences. He has illustrated a number of picture books, most notably the highly popular and award-winning book Little Elliot, Big City (which both my oldest boy and I adore). He also won the Society of Illustrators Original Art Show Founder's Award in 2014. He speaks extensively about his work and inspirations behind Flamer in this interview as well as this one.

All of the reviews I have read of this book have been positive. In their starred review, Kirkus simply advised people, "Buy it. Read it. Share it." Publishers Weekly called it "emotional and raw." Juanita Giles wrote that this book "offers real hope - not just rainbows - to queer kids."

Flamer was published by Henry Holt and Co. BYR, and they offer a preview and more here.