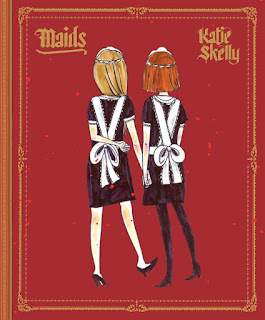 Maids is a crime tale based on the Papin sisters, Christine and Léa, who worked together as maids until they murdered their employer's wife and daughter. This is a slow burn of a book, only six chapters long, with the first five establishing background and subtly ramping up tension. The events occur mostly in the Lancelin residence, where Christine began work as a maids. She advocated for her younger sister Léa to be hired on as  cook, and the two were reunited in service. 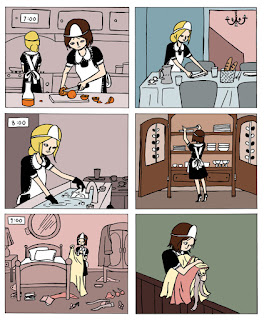 Over the course of the book, we get insights into the young women's lives, from their troubled upbringing to their years in a convent. They were unusually close and frequently got into trouble. As maids, they often were up to some form of chicanery, pilfering items, messing with food, and trying to enjoy some of their employers' finery for themselves. They worked everyday from 6 AM to 7 PM and were also treated shabbily by the Mrs. Lancelin and their spoiled daughter Genevieve. On February 2, 1933 after being blamed for a power outage in the house due to a faulty iron, the sisters brutally murdered Mrs. and Miss Lancelin.

The artwork in this book is spare but masterfully laid out in ways that build suspense to a crescendo. The color palette is warm, which contributes to a muted, dark ambience that lend a drabness to scenes of everyday life and also a sinister edge to the violence. It's a beautifully affecting book, and Skelly gets every ounce of nuance and feeling from her economical imagery. This book is gorgeous and horrible as well as a clinic in storytelling.

This book is the creation of Katie Skelly whose prior comics include My Pretty Vampire, Operation Margarine, Nurse Nurse, and The Agency (NSFW). She speaks extensively about her work on Maids in this interview.

The reviews I have read of this book have been positive. In a starred review, Publishers Weekly summed up, "This subversive horror story will satisfy readers who like their crime stories served with gender and class analysis and a pretty whipped topping." Writing about Skelly's art, Etelka Lehoczky opined, "It's a style that invites you to take it at face value while mocking your inclination to do any such thing. The theme Skelly expresses in every layer of this book is our tendency — or need, really — to underestimate anyone and anything we can't immediately assimilate: maids, girls, comics, comics about girls." Tom Murphy had a different take on the visuals, writing, "Its strong structure and narrative get as close as possible to the bond of blood between the sisters, but the bubblegum realisation on the page creates an uneasy dissonance."

Maids was published by Fantagraphics, and they offer a preview and more information about it here. Due to violence and adult subject matter, I suggest this book for mature readers.