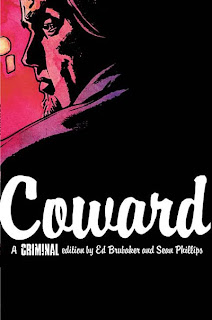 Coward has received a great number of positive reviews online. Here are a few from various sources, including one from Alasdair Stuart, one from Christopher Mills, one from Leroy Doureseaux, and a final one from the Literary Feline, Wendy R.
Posted by Stergios Botzakis at 3:28 PM No comments: 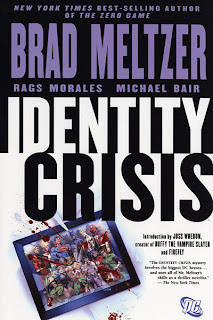 Originally a 7-issue limited series published in 2004, Identity Crisis was simultaneously "wildly popular and reviled," as described by Publishers Weekly. In this series, DC Comics placed some of their marquee superheroes from the Justice League in the hands of best-selling suspense/mystery author Brad Meltzer. The purpose was to update their characters and bring them into a more post-9/11 sensibility. In the course of doing that, Meltzer focused more on the interpersonal relationship of the heroes, their friendships, their marriages, and their families. Batman and Superman refered to each other as Bruce and Clark. Superheroes acted more like policemen. And the villains decided to hit the heroes where they hurt, at home.

The plot follows from a murder plot against the heroes' families, and no one is safe, not even Superman's wife, Lois Lane. Someone knows everyone's secret identities and is using that knowledge to perpetrate evil. After a horrific initial death, the heroes hit the streets hard to uncover the mystery threat, but their efforts hit a huge snag. The supervillains, it turns out, after years of being thoroughly romped by their do-gooder counterparts, have organized and are approaching their crimes and attacks in more strategic ways. One of the most controversial parts of the story lies in the heroes' different reactions to these events, and how much they go across their own moral lines in seeking justice. In many ways, their own heroic missions become extremely compromised.

Aside from the treatment of superheroes as morally ambiguous characters, many fans took offense at what they saw as rampant mischaracterizations and plot holes. Additionally, other critics, such as Johanna Draper Carlson and Valerie D'Orazio
Posted by Stergios Botzakis at 6:17 PM No comments: 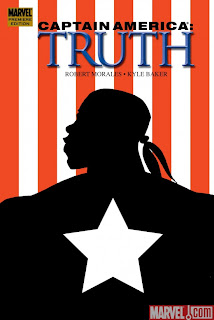 Marvel Comics has prided itself for injecting a sense of realism into their superhero stories since the introduction of the Fantastic Four and Spider-Man. The Truth is an instance of injecting some history into their mythos. Originally published as a 7-issue mini-series in 2002-2003, it reimagines the origin of Captain America crossed with the real-life events of the Tuskegee Syphilis Experiment. Instead of Steve Rogers being the sole recipient of the super-soldier serum, we learn that the US government secretly experimented earlier with African-American soldiers. What is more, this series is not an imaginary story or a "what if?" scenario. It counts as an official part of continuity.

The Truth mostly focuses on three people: Isaiah Bradley, a young soldier who has just left his wife and unborn child to go into the service, Maurice Canfield, a son of a wealthy industrialist, and Luke Evans, a career soldier who fought and was disfigured in World War I. A large part of this series involves the moral implications of these experiments, with a special focus on a shameful racist past and cover-up. In the course of the story, these experiments are also juxtaposed with the Nazi Dr. Menegele's experiments with Jewish prisoners during World War II.

The combination of racial considerations, US history, and superhero comics is celebrated by some critics, represented here by this review from Brent Staples. Other reviews, such as this one by Brian Cronin, point to how this may be a great concept for a story but how the story may be lacking in execution. In particular, the first 5 issues are a series of intertwined narratives which build to a dramatic point that gets diffused as the last 2 issues are full of long stretches of expository dialogue. Other criticisms have been made about the cartoonish style of the art as perhaps being inappropriate for such serious subject matter.

The Truth was written by Robert Morales, a writer and editor who worked for Vibe magazine and has limited comics work. Kyle Baker, who describes himself with tongue-in-cheek as the "Greatest Cartoonist of All Time," provided the art. He has been drawing comics for more than 20 years, having begun his career as a high school intern at Marvel. Baker is a respected comic artist, cartoonist, and animator who has won 8 Eisner Awards over his career.

For a more detailed summary of The Truth, including more about its impact on Marvel Comics continuity, see this page at Everything2.com. For a detailed account of Captain America and his career, see his official page at Marvel Comics. For more information and links about the Tuskegee Syphilis Experiment, check out this NPR feature.
Posted by Stergios Botzakis at 3:31 PM No comments: 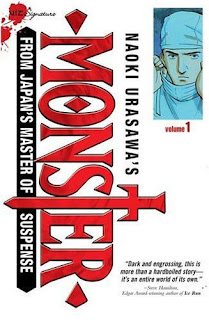 Set in Düsseldorf, West Germany in 1986, Monster recounts the story of the brilliant Dr. Kenzo Tenma, a Japanese surgeon. Tenma has a potentially great live ahead of him, blessed with great medical skill, a successful career, and an engagement to the beautiful daughter of the hospital director. But when he goes against his superiors' orders, his life is radically changed. What began as a seeming good deed instead unleashes an evil onto the world. These events also allow Urasawa to begin a huge series of twists that keep drawing readers in for more.

Dubbed "Japan's Master of Suspense" by VIZ Media, Naoki Urasawa weaves a compelling tale that incorporates complex characters, social issues, Cold War politics, as well as contemplations about how evil and justice operate. Urasawa has won numerous awards over his 20 year career. He has won the prestigious Shogakukan Manga Award thrice, the Osamu Tezuka Cultural Prize twice, and the Kodansha Manga Award once. Meanwhile in the US, Monster has been nominated twice for the Eisner Award. Urasawa has also entered the world of academia, in 2008 accepting a guest teaching post at Nagoya Zokei University, where he teaches courses in (what else?) manga.

Monster has received generally positive reviews. Here is one from Johanna Carlson Draper, one from Leroy Douresseaux, and one more from Robin Brenner. Originally, the series ran in Big Comic Original magazine from 1994 until 2001. It has been collected in English as an 18 volume series. The story has also been adapted into an anime, which will begin airing soon in the US on SyFy.

The official website, a hub for all these media versions, can be found here.

This was the very first manga series I read, on the recommendation from the good folks at Comicopia in Boston who told me that this was "a manga for people that don't like manga." I'm really glad I listened to Matt...

Posted by Stergios Botzakis at 2:12 PM No comments: 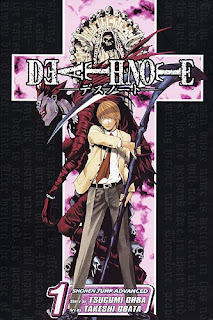 One of the most popular manga series in the US, Deathnote is the tale of what happens when a bored shinigami (a version of a Grim Reaper) drops two notebooks onto earth just to see what happens. The first rule about these notebooks is that whoever's name is written in them will die, and the first book of the series follows Light Yagami, an honors students who happens to find one of the notebooks. Light decides that he is going to use the notebook as an instrument of good and remake society by killing all of the criminals and unsavory elements who ruin things for innocent, hard-working people. A rash of unexplained deaths of convicted criminals alerts the authorities that there must be some unknown person or force behind these events, so they turn to a mysterious, unseen, crime-solving genius known only as L for help. And thus begins a game of intrigue as each of these two adversaries maneuver to expose the other.

The story was written by Tsugumi Ohba, which is a pen name. The author's actual name and gender are not definitively known, but some fans believe that Ohba is a pen name for Hiroshi Gamo, a writer of gag series for Weekly Shonen Jump magazine The artist is Takeshi Obata, who won the Shogakukan Manga Award in 2000
First serialized in 108 chapters from December, 2003 to May, 2006 in Shonen Jump, Deathnote is published in English by VIZ Media as a 12 volume series. There is a 13th volume, titled How to Read Deathnote which contains more detailed character information, interviews with the creators, a trading card, and a short follow-up story. There are many rules that go along with the notebooks, and they are included in the volumes as interstitial pieces. Among the rules: the deathnote's owner must know the person's name and also what they look like. Also, he/she can write the cause of death as well.

Deathnote has been very well reviewed in general, as seen in reviews from the Anime News Network and IGN. The manga's popularity has spawned different media versions, including an anime series, video games, and thus far, three movies. The first two films detail the events of the manga series, while the third is a prequel about L and his early career. An English language film version is also currently being optioned in Hollywood. Along with its popularity, Deathnote has also spawned controversy, ranging from teenagers creating deathnotes about classmates (examples here and here) to at least one copy-cat murder. The book is currently banned in China to protect young readers' "physical and mental health."
Posted by Stergios Botzakis at 9:22 AM No comments: