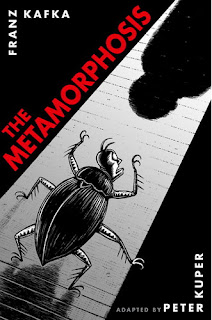 Graphic novel adaptations have tended to be the province of Classics Illustrated, but a growing trend has seen notable artists translate some of their favorite works into another medium. This adaptation of Franz Kafka's The Metamorphosis is very faithful to the original novella (first published in 1915) about a traveling salesman who wakes up one morning and finds himself transformed into a giant insect. Protagonist Gregor Samsa's plight is traditionally seen as commentary on the modern condition of life. Trapped in a situation over which he has no control, he is forced into strained relations with his job, his family, and the narrowing world he lives in.

Peter Kuper, the artist who has adapted this work has long had an interest in political causes and drawing socially charged cartoons. He co-founded the political comix magazine World War 3 Illustrated in 1980 and has also adapted the muckraking classic The Jungle by Upton Sinclair. A successful commercial artist, Kuper also has published work in Time and Newsweek magazines and currently draws the Spy Vs. Spy feature in Mad Magazine.

The dark, blockish illustrations in The Metamorphosis reflect the bleak subject matter, and Kuper embellishes the actions and emotions in an extremely expressive manner. The black on each page dominates the small glimpses of white, and the whole book is composed of scratchboard images. Another feature that adds to the atmosphere of futility is that Kuper decided to portray Samsa as a roach, an image that is disputed by a number of translators.

The book has been generally well reviewed, as seen in this example from Lenora Todaro from The Village Voice. There are also a range of reviews available at Goodreads. More about Kuper's views and work can be seen in this interview with Erik Farseth.

Finally, an animated preview of the book is available online from Random House.
Posted by Stergios Botzakis at 5:33 PM No comments: Nominated for an Eisner Award for Best Publication for Teens in 2008, The Annotated Northwest Passage is a piece of historical fiction set in the Canadian frontier in 1755. The story revolves around Charles Lord, a British explorer, governor, and company man, and his conflict with the ruthless Guerin Montglave. Montglave is a French privateer who will stop at nothing to take control of the territory and trade Lord has established. The two men have a long history of cut-throat competition which is rekindled in a siege of Fort Newcastle, which has been left vulnerable by Lord's retirement and planned return to England. Montglave is clearly the villain in this struggle, as he stops at nothing to keep control of his men, including murder and manipulating Simon, Charles's half Native American son, against his father.

Northwest Passage has a large cast of characters, and a tremendous amount of backstory is woven throughout the narrative. This information is further bolstered by copious annotations which provide insight into Chantler's layouts, artistic choices, and historical research. The annotations also provide some historical contexts for the story. But for all this research, the narrative has emotional punch and a great sense of pulp drama.

The creator of Northwest Passage is Scott Chantler, an acclaimed graphic novelist and popular commercial illustrator who has been for three Shuster Awards, three Harvey Awards, a Doug Wright Award, a Russ Manning Award, and an Eisner Award, but, as he likes to joke on his blog, "has somehow managed to avoid actually winning any of them."

Although it is considered an all ages book, The Annotated Northwest Passage has lots to offer older and younger readers alike.
Posted by Stergios Botzakis at 5:25 PM No comments: 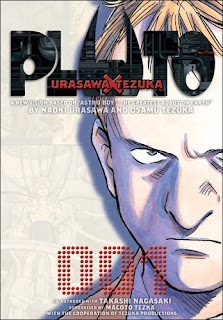 Osamu Tezuka is considered the Walt Disney of Japanese animation and comics, responsible for a number of beloved characters, chief among them Astro Boy. So recasting one of the most beloved of Astro Boy's stories, "The Greatest Robot on Earth" is a tall order, much as it would be to redo a classic such as Bambi or Snow White. In this case, Urasawa plays to his strengths, recasting the story into a murder mystery. A mysterious figure is destroying the most powerful robots in the world, and one detective is on the case. That detective is Gesicht, who is himself a highly advanced, powerful robot.

As the series goes on, it redresses some of the more anachronistic parts of Tezuka's tale, with a more realistic and less stereotypical portrayal of Middle Eastern people and conflicts. The ability of Urasawa to marry ideas from Tezuka's original story with popular culture and historical references from more recent times is one of the great strengths here. The story is not a direct update but also draws on a great many pop culture works like Isaac Asimov's I, Robot and Star Trek: The Next Generation as pointed out in this substantive review by Ed Sizemore. It is this eye to include disparate elements that lends greater intrigue and depth to the story.

Naoki Urasawa is one of the most acclaimed purveyors of manga in recent times. His work on series such as Monster and 20th Century Boys has led to financial and critical success. He has won the prestigious Shogakukan Manga Award three times, the Tezuka Osamu Cultural Prize twice, and the Kodansha Manga Award once. Pulitzer Prize winning author Junot Diaz even called him "a national treasure in Japan."

Updating a classic for a modern audience is no easy task, but according to many reviewers, including Charles Tan, Urasawa's effort here is very successful. The strong characterizations in the story led Greg McElhatton to call it a "must read." One other review from Deb Aoki compares the updated Urasawa version to the original Osamu story.

For people interested in more discussion on this volume there is a substantial essay on the series on the Tezuka in English website.
Posted by Stergios Botzakis at 5:29 PM No comments:

Notes for a War Story 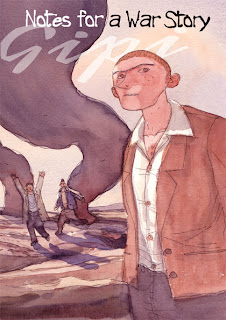 Originally published in Italian, Notes for a War Story won the 2005 Goscinny Prize for Best Script and was the Best Book of the Year for 2006 at Angoulême, Europe's largest comics festival. Notes follows the exploit of three friends in a war-torn country and their efforts to stay alive. The three boys in the story band together, bicker, and form a pseudo-family when it seems that their families and town have been lost to them forever. Scraping together food and finding shelter become their major concerns as well as contending with desperate, violent people who are also trying to stay alive. Their lives take a turn when they meet up with Felix, a charismatic thug who sends them on missions. In return for doing his dirty work, they receive money, food, and weapons.

Throughout the story, the morality of war is constantly questioned. Causes and honor seem to fall by the wayside in the interests of survival and displaying strength. Gipi (whose actual name is Gianni Alfonso Pacinotti) wrote and drew Notes with his native Italy in mind, but he did not name any place in the story. He intentionally left the country unnamed in the hopes that readers would imagine the war happening close to home. The publisher of the book in the US, First Second, states on the book flap that it is meant to be set in a Balkan country. Wherever the story is set, the events portrayed are very realistic and moving.

Although very well received in Europe, Notes has not made as big a splash in the US, perhaps because the conflict is foreign to Americans. Taken as a survival story and an exploration of friendship in the face of adversity, I think that the book is very compelling and affecting. The book has received a range of reviews, from positive ones that point out the poignancy and emotional impact of the plot, such as this one by Brian Heater, and ones that comment on the strong characterization like this one by Jog, to lukewarm ones, such as this one by Andrew Wheeler who was underwhelmed by the book. In each, the reviewers also remark on connections to Garage Band, the first Gipi work published in English and the growth he seems to be displaying as an artist.

First Second provides a lengthy preview of the book here.

My thanks to Gina Gagliano at First Second who gave me a review copy at the 2009 Graphica in Education Conference at Fordham University.
Posted by Stergios Botzakis at 5:28 PM No comments:

The Facts in the Case of the Departure of Miss Finch 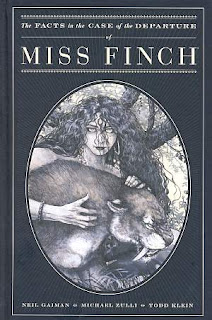 The Facts in the Case of the Departure of Miss Finch is typical of Neil Gaiman's work in the manner that fantasy and reality mingle. This magically realistic story originally appeared as a prose story in Gaiman's collection, Fragile Things. Lushly painted by frequent collaborator Michael Zulli, the story follows a character seemingly based on Gaiman and some of his friends, including the eponymous Miss Finch, who is depicted as an up-tight biogeologist. This band of friends go out for dinner one evening and also to a strange circus operating in a London building. The ringmaster of the circus looks like Alice Cooper, and the circus itself is a mix of Cirque du Soleil and Carnival. Typical of Gaiman's work, things are not quite what they seem and a few strange twists in the evening's entertainment leave the characters unsure of quite what has happened.

Gaiman is best known as the best-selling author of novels such as American Gods, Anansi Boys, and The Graveyard Book. He has also written a number of books that aimed at younger readers such as The Wolves in the Walls or, more famously, Coraline, which was recently adapted into a feature film. To comics fans, he is most famous for his Sandman series published by Vertigo.

Published by Dark Horse Books, Miss Finch is a short book and a quick read. It is nicely packaged but not very substantial and has appealed to completists who are fans of Gaiman's work. This has been reflected in a number of the reviews found online, including these from Andrew Wheeler and April Gutierrez. A slightly wider range of reviews can be found here on Goodreads.
Posted by Stergios Botzakis at 4:09 PM No comments: