In this time of social distancing and no comics conventions, I have been checking out books from various small, independent presses whenever I can. That's how I came upon the two titles I am reviewing today, from one of my favorite presses Silver Sprocket. 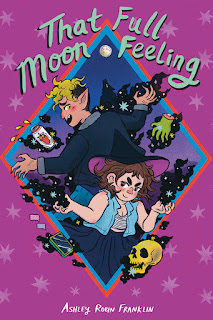 That Full Moon Feeling is a queer, supernatural, love story about a witch and a werewolf who meet on a dating app. They go on a series of dates, but each one ends in disasters, like being attacked by a swamp monster, a necromancer's army of skeletons, disembodied hands, or giant praying mantises. Somehow, despite all these adversities (or maybe because of them?), they find a connection. 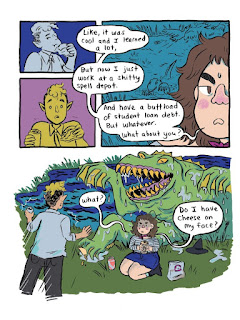 I loved this story, as it is very sweet without being cloying. I found a lot to empathize with a situation where two people just figure out that they are right for each other, and I loved the amount of character work done throughout the book. Both Suzy (the witch) and Jada (the werewolf) are unique, and I found it easy to fall in love with both characters. Also, although this book is clearly set in a fantasy realm, it is an authentic and refreshing take on contemporary romance.

The artwork complemented the story perfectly, with characters being imbued with lots of heart and emotion. Also, there is a lot of delight in the various monsters and other horrific denizens of this world, not to mention that animal familiars that Suzy associates with. In addition to all the fun imagery, there is also an interesting incorporation of technology in the storytelling, like the interactions on the dating app, texting, and the various group messages that Jada receives from her pack.

This book's creator Ashley Robin Franklin also has published a number of other comics, including the horror/romance tale One Million Tiny Fires. She discusses her career and work on That Full Moon Feeling in this interview.

All of the reviews of this book have found it delightful. Ryan C. wrote that it "lithely threads the needle between two genres that are by and large of little interest to me, specifically romantic comedy and the supernatural, yet nevertheless managed to warm my cynical middle-aged cis white male heart and plant an entirely unforced smile on my face for the duration of its 64 pages." David Charles Bitterbaum called it "a stupendous comic. It is very sweet, fantastically illustrated, and immensely cute."

You can find more info and a preview of That Full Moon Feeling here. 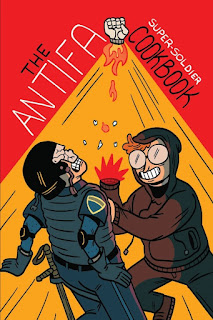 I was way more familiar with this creator's work, as Matt Lubchansky is an Associate Editor and regular contributor to The Nib, so I see a lot of their work regularly. The Antifa Super-Soldier Cookbook is a hilarious, long-form satire about Max Marx, a radical who gets a huge call-up from Antifa. Because of his past successes, the secret council selects him to become a super-soldier. 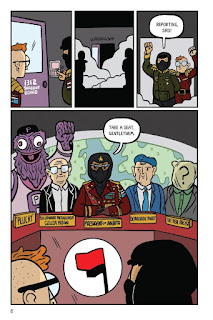 I love how this book amplifies a paranoid conservative conspiracy theory that what is a loose affiliation of political activists is really a covert, highly organized organization along the lines of COBRA. Their various training initiatives and sabotage operations are shown in nefariously absurd detail, but underlying the silliness is the serious counterpoint that in the police/political realm, such action is actually happening. I found much to laugh at in this book, but the humor is tempered with an edge about what is occurring in our country/world today.

Well suiting its subject matter, the artwork in this book is appropriately over-the-top, with shady police officers, fantastical inventions, and lots of bombastic action. I especially adored all the nifty gadgets built into Max's new robotic body. This book is an excellent satire that balances ridiculous and outrageous imagery with sobering social commentary.

The reviews I have read about this book have been positive. Brett Schenker called it "a solid satire that has fun with the absurd reality some people live in." Ryan C. wrote about it coming from a specific political stance, opining "If...you’re a rational and well-adjusted human being, then you’ll probably get a solid kick out of it."

Also, for those interested, Lubchansky speaks more about this book and their career in this interview.

You can find a preview and more info about The Antifa Super-Soldier Cookbook here.

Because of profanity and adult themes, I recommend both of these books for more mature readers. 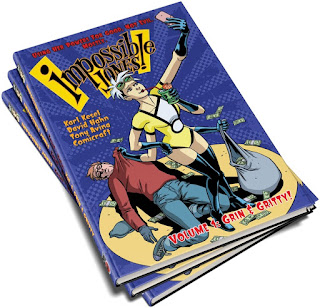 Impossible Jones: Grin and Gritty! is a comic I supported via Kickstarter, and I am happy to have just read the book. It is a fun superhero tale about a thief named Isabelle who gets caught in some weird teleportation gizmo on a job, and days later she reappears altered, now with superpowers. She is a sort of combination of Plastic Man and Harley Quinn, and over the course of this book she learns more about her abilities and how to use them. She also has a pretty quick sense of humor, so although she experiences lots of danger she is pretty snarky about it all.

Impossible Jones can change her shape and appearance, which comes in handy for lots of the scrapes she finds herself in. Her first inclination is to go after her crew to get revenge for what happened to her, and as a result, she inadvertently gets affiliated with the local superheros of New Hope City. They are a motley bunch that include figures such as the Polecat, Even Steven, and Captain Lightning. Still not altogether altruistic, she thinks that the hero angle will provide her the perfect cover for occasional thefts, but she keeps getting thwarted by the schemes of villains like Mr. (Gila) Monster, Homewrecker, The Saint of Knives, and holiday-themed thief Holly Daze. 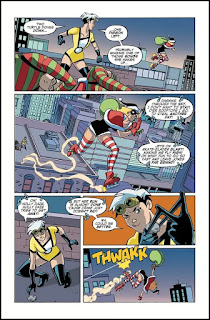 As you can probably tell from this description, these comics are relatively light-hearted, action-dramas reminiscent of classic superhero tales. I would not call this book all ages, though my 5-year-old was very curious about it and kept sneaking over my shoulder to read it along with me. I think that the stories are well told, the world-building solid, and the characters appropriately colorful and interesting. I am particularly intrigued to see what will come of Even Steven, an enigmatic character who seems to be incredibly powerful and visually inspired by Steve Ditko-created characters like The Question.

There were many moving parts in this book, and I found each of the four chapters to be exciting, engaging, and suspenseful. The ending is entirely open-ended, begging for more tales to be told in this universe. Impossible Jones is good, mostly clean, superheroic fun.

The main creators involved with this book are writer Karl Kesel and artist David Hahn. Kesel is a veteran of the comics industry since the 1980s as a writer and inker, having done the majority of his work at DC Comics on characters like Superman and Harley Quinn. Hahn is another comics veteran, best known for his work on the Bite Club series as well as Batman '66. Both creators speak about their collaboration on Impossible Jones in this interview.

I was not able to find many reviews for this book, but what I did find has been very positive. Edo Bosner wrote in the most direct way, “It’s really fun, you should read it.” It currently has a 4.6 (of of 5) star rating on Goodreads.

Impossible Jones: Grin & Gritty! was published by Panic Button Press, and they offer more info about it here. There is a Kickstarter for a follow-up comic book in this series happening right now.