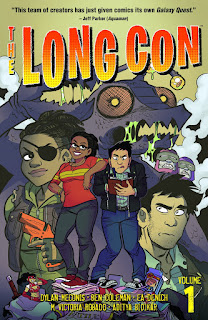 The Long Con is what I'd call a high concept series, based on the premise that a bomb went off in the southwestern United States, killing everyone in a 50 mile radius and giving rise to some horrific mutations. Five years later, a desperate newspaper reporter is sent into the forbidden zone to explore and report on the site of the Long Con, the hugest popular culture event of the year (a thinly disguised San Diego Comic-Con). What he finds is astounding, the convention center was somehow shielded from the destruction and fallout, and in the interim a small society of survivors has evolved that lives on processed foods and occasional cannibalism.

Of course, the survivors being comics fans, sci-fi geeks, and random featured celebrities, their society ends up consisting of factions based on fandom and the level of their access badges. This set-up makes for a satirical look at those folks, as they conduct purity tests to assess who is and is not an outsider and just behave in the most extreme sorts of manners. They still engage in cosplay, though the stakes have become much higher over time. I enjoyed this book well enough, and I had been looking forward to reading it for a while, but in the end I was left a little cold by the whole thing. It has lots of geek culture references to satisfy those in the know, and I appreciated them (or at least the ones I got), and it comes from a place of love for fandom, but I feel that almost all the characters are too one-dimensional for me to care about. What could have been an interesting premise just went to typical sorts of humor and jokes about rabid fanboys and fangirls. 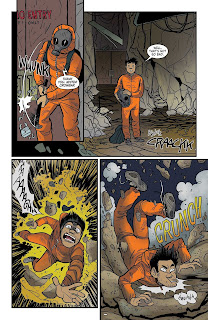 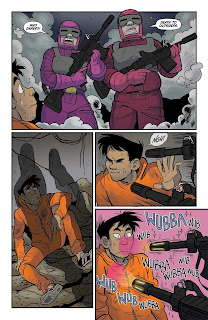 My favorite part of the book was the artwork, which is fun, energetic, and full of vibrant details. And it really pulls off the trick of depicting parallel narratives from the past, present, and fictional TV versions of Skylarks (a Star Trek pastiche). Overall however, the book left me feeling that maybe I am not its target audience, so others' mileages may vary. Perhaps book 2 will have a better payoff, when the whole story culminates.

This volume collects the first 5 issues of the 10 issue limited series. It was written by Dylan Meconis and Ben Coleman, drawn by EA Denich, and colored by M. Victoria Robado. Meconis is a member of the creative collective called Helioscope, and an Eisner, Reuben, and Kim Yale-nominated cartoonist. She has worked on lots of comics in the past including the series Family Man, the graphic novel Wire Mothers, and the forthcoming Queen of the Sea. Coleman writes for the Portland Mercury and does not seem to have any other comics credits. Denich has also drawn the graphic novel Yes Roya. Robado has lots of illustration credits and also works on the webcomic #Blessed. The creators speak about their work on this series in this interview.

The reviews I have read of this book have largely been positive. Charles Hartford described it as "fast paced, lots of fun." Christopher Scott concluded his review, "This first volume is a send-up of the chaos that is a convention and uses it for an interesting twist, loving fandom for what it is and never crossing the line from respect into meanness." Lonnie Webb wrote, "Dench’s art is full of cameos and beautifully drawn with great characterization. More-so than a parody might have deserved. Tops on that. Colors by Victoria Robado are nice and completely fit the bill."

The Long Con, Volume 1 was published by Oni Press, and they have more info about it here. Currently the series is up to issue 8.
Posted by Stergios Botzakis at 12:00 PM No comments:

Cannabis: The Illegalization of Weed in America 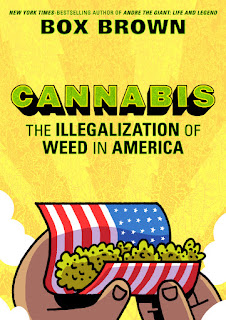 First off, I meant to have this post up for April 20, but life has been hectic lately, and as you might tell, I have not been posting as regularly as accustomed. Hopefully, this is the book to get me back on track. I am a big fan of Box Brown's work, and in the past his stuff has appeared on my "Best of" year-end lists. This book is unique though in that I am not really that familiar with the topic and it's not something, like professional wrestling, video games, or comedy, that I have been a fan of. So this book was more of a learning platform for me. Cannabis: The Illegalization of Weed in America covers a lot of ground and includes lots of different insights. It shows, among other things,
And I gleaned much here. For instance, I had no idea who Harry J. Anslinger was before I read this book, let alone that the man almost single-handed created the "war on drugs" as we know it. It is horrifying to see how much he relied on false claims, racism, and prejudice against immigrants to push public policies that have led to decades of abuse, misinformation, and incarceration. A large portion of the book focuses on his work, and he definitely comes off as a villain, which seems appropriate and sadly familiar to some contemporary voices I hear.

There is a lot going on in this work, and it is well researched, with a huge bibliography at the end. I think it may have benefited from some chapter headings to help steer the reader, but overall I feel it does its job well. It contains all sorts of disparate information and weaves it together into a portrayal of the modern take on marijuana use. It also makes a strong thesis for why current policies and views are misguided and wrong. I feel it is a strong piece of comics rhetoric and history, and I highly recommend it.

This book's creator Box Brown has left a big footprint in comics already, founding the indie imprint Retrofit Comics. He has also created a cavalcade of comics, mini-comics, and graphic novels, including his biographys of Andre the Giant and Andy Kaufman as well as his history of Tetris. He speaks about his work on Cannabis in this interview as well as this NPR interview.

The reviews I have read of this book have ranged from good to lukewarm. Jonathan O'Neal wrote, "Brown’s book presents an impassioned case for continuing the discussion over this very complicated issue, and with “Cannabis: The Illegalization of Weed in America,” Brown becomes an important voice in that conversation." Henry Chamberlain called it "a most remarkable book in how it packs together a disparate clump of facts and myths and makes sense of it all." Kirkus Reviews summed up, "Not as engaging as the author’s bio of Andre the Giant, but his uncluttered drawings suit his straightforward argument."

Cannabis was published by First Second, and they offer a preview and much more here.
Posted by Stergios Botzakis at 12:00 PM No comments: