The Adventures of Superhero Girl 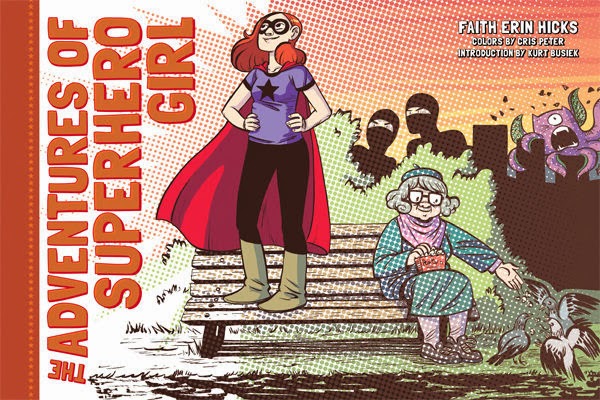 Faith Erin Hicks has been knocking the ball out of the graphic novel park for a while now. I very much enjoyed her books Friends with Boys and Nothing Can Possibly Go Wrong. She is a graphic novelist, webcomics creator, and animator whose growing list of impressive works also includes The War at Ellsmere and Brain Camp. Today I am looking at a compilation of her webcomic, The Adventures of Superhero Girl.

This series began as a strip in Halifax's free weekly newspaper, The Coast, and was also published online. It follows the exploits of a superheroine who is trying to make it in the big city. She has a roommate, short job prospects, and a good, occasionally strained relationship with her mom and golden child older brother. 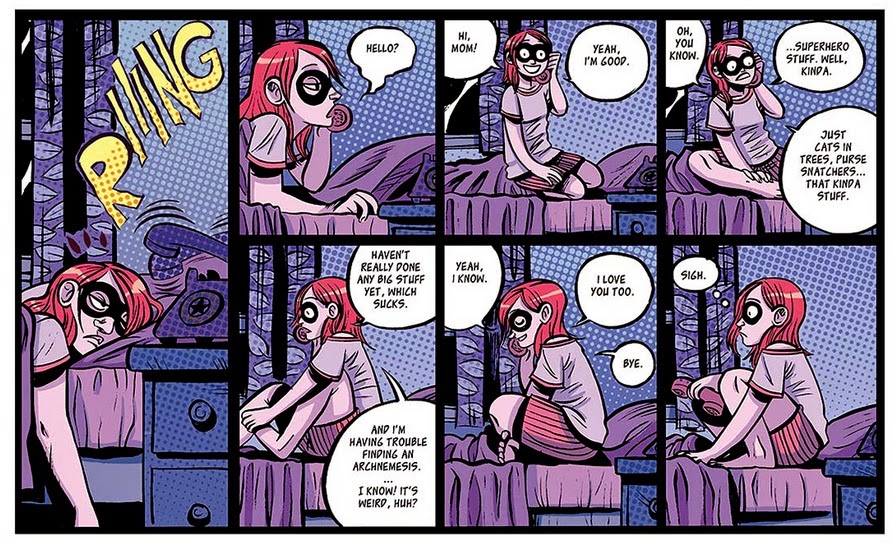 She does her requisite superheroic duties, which include fighting aliens and ninjas, and of course she also rescues cats from trees. 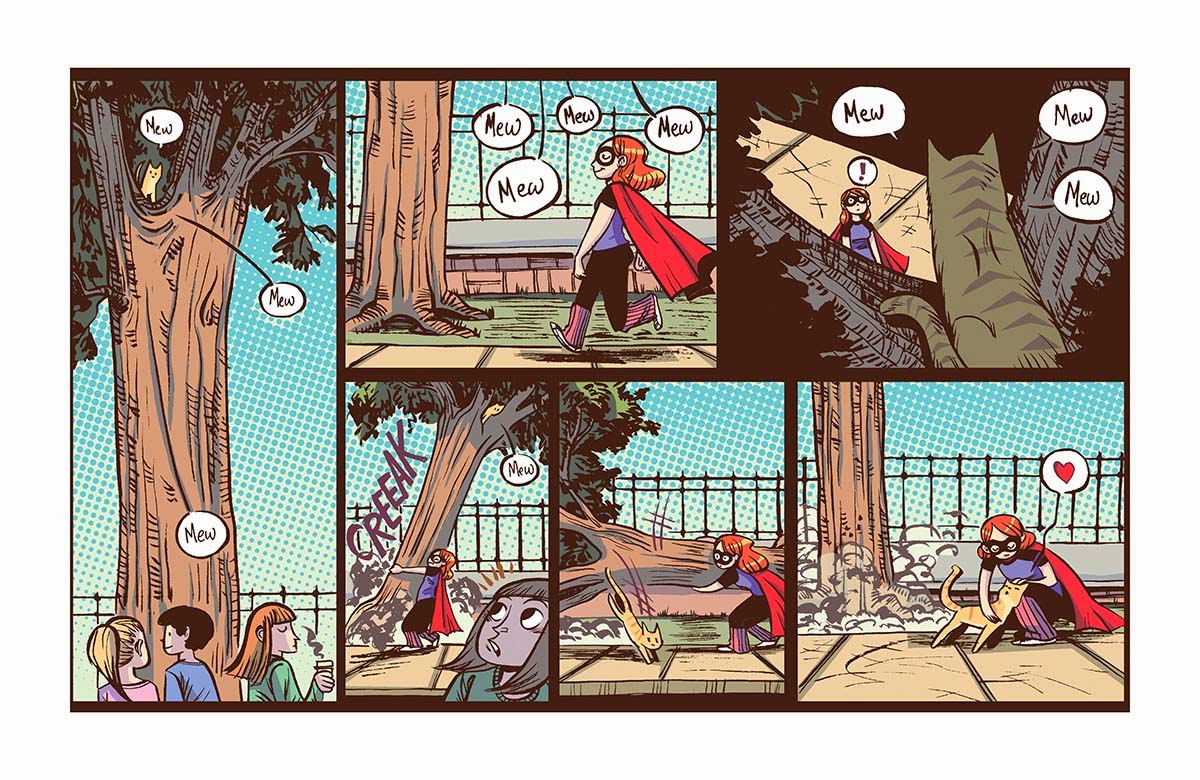 Aside from creating art packed with personality and verve, Hicks does an excellent job playing with superhero conventions and mixing them with more mundane matters. I think she is awesome at delivering laughs as well as evocative scenes and characters. 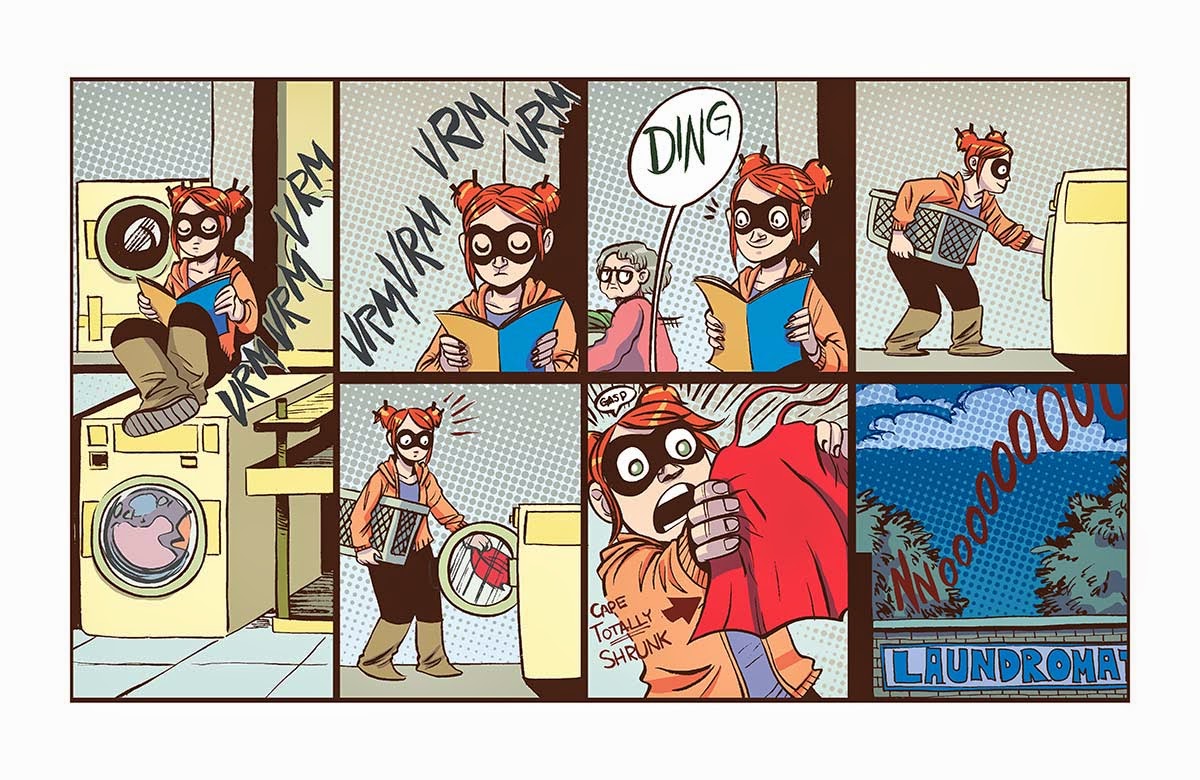 The most obvious shift in the compilation from the webcomic is the introduction of color by Cris Peter. He is well versed in coloring comics for all manners of companies, and I enjoy how he makes these strips look slightly pixelated, like print comics did before the 1990s.

The reviews I have read about this book have been overwhelmingly positive. Hillary Brown compared it to Friends with Boys, offering that "this collection is less polished in many ways, but also more charming, especially with Cris Peter’s smart coloring and halftone-dot backgrounds." Laura Sneddon made an impressive list of this book's positive features: "brilliant and funny comic with great characters; starring a woman superhero (whoot!); ninjas!; accessible without any prior comics knowledge; equally enjoyable with said knowledge; kitties!; lovely physical book with extra features and great colouring; suitable for all ages!" Joe Grunenwald summed up, "Your bookshelf will definitely a brighter place for having Superhero Girl on it."

This collection was published by Dark Horse, and they provide a preview here. The online version of the comic can be found here.
Posted by Stergios Botzakis at 12:00 PM