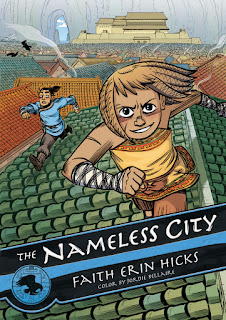 The Nameless City is the first book of a trilogy, and I must say it is an impressive introduction that left me eager for the forthcoming volumes. The narrative is set in a fictional Asian city that has no name, or rather it has so many names because it is constantly being conquered and overrun by warring factions that all they are meaningless. The main players are a couple of adolescents named Kaidu and Rat. Kaidu was born a Dao, one of the current occupiers of the city, and he is being trained to be a soldier. Rat is a native to the city, and she lives a hardscrabble existence. 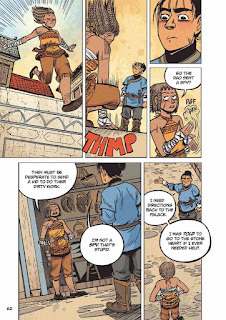 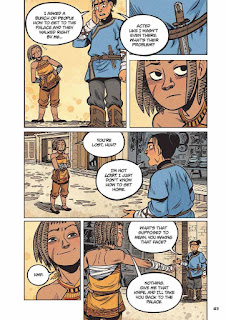 These unlikely friends begin with a very utilitarian relationship: she will teach him to run across rooftops in exchange for him bringing her food and other necessities. Still, their friendship is forbidden, and he should not even be outside by himself in the city. Their secret gets complicated when the pair overhears an assassination plot and are moved to action, but so much of what I appreciated and enjoyed about the story was seeing how a weary partnership led to growing respect and an organic friendship. I foresee many readers growing to feel strongly for Kaidu and Rat in quick fashion.

Additionally, there is a lot of world-building going on here, with entire peoples, legends, classes, tribes, and places being established. But much of it feels very familiar and intriguing, and I was impressed by how quickly I got into the narrative and grew to like these characters. The artwork is impressive; the storytelling expert, and the entire enterprise is exceptionally well packaged. If there is any justice in the world, this book will be very popular.

This book's author Faith Erin Hicks has been an excellent, prolific comics creator, and she is one of my favorite artists. Among her growing list of graphic novel publications are Friends with Boys, Brain Camp, and Nothing Can Possibly Go Wrong. She also has published webcomics, including The Adventures of Superhero Girl, which won an Eisner Award. She speaks about her work on this book in this interview.

All of the reviews I have read of this book find it well crafted, and it already has garnered a number of starred reviews. One, from Kirkus Reviews, called it "A superb beginning" and stated that fans "will appreciate its mix of fun and adventure and its exploration of questions of identity, belonging, and history." Another, from Publishers Weekly, praised the "polished " artwork and "significant depth" of the story. Claire Thorne offered a contrary opinion, finding the book too neat, writing that "the simple and predictable nature of the plot left me searching for more intrigue, more tension, and more entanglements between the characters."

The Nameless City was published by First Second, and they have a preview and much more available here.