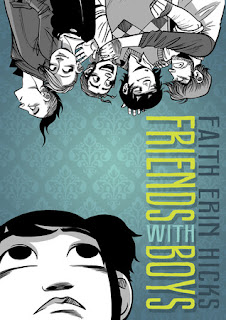 With Friends with Boys, Faith Erin Hicks paints a very human, relatable, and moving picture of a girl in transition. Maggie has been home-schooled her whole life, but now she is about to enter public high school, and she feels like her life is being turned upside-down. Her mom, her only teacher, has left. Her three older brothers, her only friends, are growing up and becoming distant. Her dad has become the chief of police and has to change how he looks and acts because of his new role. To add to everything, Maggie is also seeing a ghost who follows her around more and more.

Hicks is a long publishing web cartoonist who is known for smart, idiosyncratic series like The Adventures of Superhero Girl and Demonology 101. She has also worked on a number of graphic novels including Brain Camp and The War at Ellsmere. She has won multiple Web Cartoonists' Choice Awards as well as a 2008 Joe Shuster Award for Best Creator (English Language) for her graphic novel Zombies Calling. Hicks talks more about the business side of creating graphic novels in this article.

Thus far this book has been extremely well received, with many expressing enthusiasm to see Hicks' latest work. Reading Rants wrote that "this insightful, smart" graphic novel "does a great job of not only telling the real deal about high school but also sensitively exploring the interesting dynamics of sibling relationships and how brothers and sisters can be your best friends—if you let them." Librarian assistant director Tasha Saecker commented that this book uses the graphic novel format well and that "the story takes several surprising twists, which makes it all the more readable." The tough critics at Kirkus Reviews awarded it a starred review. Also, for those who like to listen to their reviews, here is 3 Chicks Review Comics podcast.

I know it is early in the year, but I would be shocked if this graphic novel did not appear on any year-end "best of" lists. I was taken by how well executed and emotionally charged it was. Hicks is expert at creating small but powerful moments in very subtle ways.

This edition is published by First Second, and they provide a preview, discussion guide, and more here. Friends with Boys is also published as a webcomic.
Posted by Stergios Botzakis at 12:00 PM