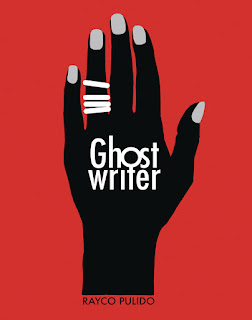 Ghostwriter is a gorgeously illustrated, stylized murder mystery set in 1943 Barcelona. It features a fascinating cast of characters and a taut plot. The protagonist Laia is a pregnant wife whose husband has seemingly abandoned her, and she looks after the two young children of her downstairs neighbor when her husband is physically abusive. Rounding things out are a detective who uses hypnosis to gather evidence, a paraplegic beggar who can scale fire escapes like an ape, and a group of clergy and matronly women who write the scripts for a wildly popular weekly radio program that doles out advice on romance and other domestic matters. Add to the mix a series of grisly murders, and what you have is a serious pot-boiler of a mystery that plays with basic gender assumptions. I won't get much more into the plot, as I don't want to spoil all the twists and reveals, but I would like to draw attention to the artwork. 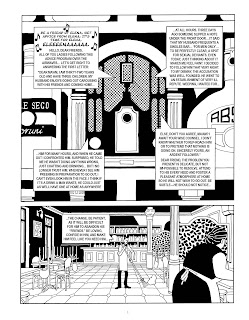 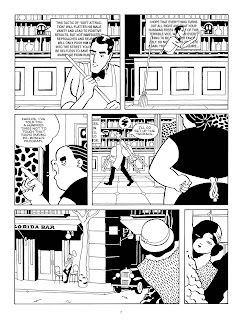 What you see here are the first pages of the story, and they are unusual in that they contain a lot of exposition, which is not characteristic of the rest of the book. What is typical is the wonderfully geometric architecture of the buildings and panels. Also, the interplay between black and white makes for some excellent atmosphere and contrast throughout the book. It is a clinic in setting and conveying tone. There are a few (bloody) instances later in the book where red is used to highlight the gory murders, adding an element of shock to the proceedings.

The artwork also acts in some ways to create leitmotifs that foreshadow later events in the story, an aspect that invites and rewards multiple readings. Overall, I was impressed by how well crafted a mystery this was, both in terms of story and art. I don't know if this book has broad appeal, but it is a spectacular period piece for murder mystery and European comics fans.

This book is the creation of Rayco Pulido, a Spanish illustrator and educator. It is his English language debut, having won Spain’s National Comics Award in 2017.

All of the reviews I have read of this book have been positive. Publishers Weekly concluded, "The enigmatic tale is recommended for genre readers seeking a classier flavor of pulp fiction than the standard femme fatale and shoot-’em-up fare." Kirin Xin called it "thoughtful and stunning." Andy Oliver opined that "two readings of Ghostwriter are a must – the first to lose oneself in the unpredictable turns of Laia’s story and the second to enjoy in hindsight just how tautly plotted Pulido’s tale is."

Ghostwriter was published by Fantagraphics, and they offer a preview and much more here.