In a Glass Grotesquely 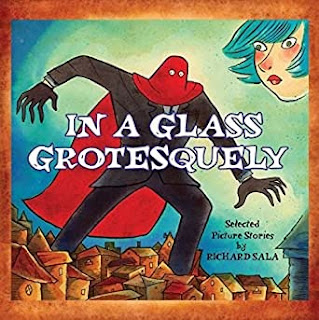 2020 has been a turbulent year, full of turmoil and tragedy. One of this year's biggest losses for me in the world of comics was the sudden death of Richard Sala. I love his distinctive art style, which was reminiscent of many influences, an amalgamation of Mad magazine details and Expressionism as well as elements of Charles Addams and Edward Gorey. He was excellent at creating tone and crafting punchy, creepy, compelling stories.
In a Glass Grotesquely contains one large story and three shorter, black and white pieces. The three final stories are more emblematic of Sala's general style: dark, claustrophobic spaces full of terrible and weird characters. The lead tale, "Super-Enigmatix," originally serially published as a webcomic, contains many elements of what made Sala's work so memorable and exciting. Tonally, it's like a old-time movie serial, packed with plot and powerful visuals. It features a mysterious genius figure bent on murder, conspiracy, and sowing chaos. There is an army of armed female assassins, giant killer plants, and many red herrings/plot twists. It also strikes me as being a story that at once recalls the past in terms of genre but in terms of theme speaks to contemporary matters such as reality television, fake news, and government manipulation. It plays as both loving homage as well as biting satire. I find it fascinating just how timeless and timely this book is. 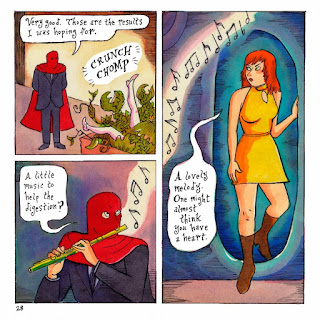 But, this being a work by Richard Sala, for me it's biggest selling point is the artwork. The main story is rendered in color, and it contains a number of fantastic elements, including a wonderfully disguised antagonist, a bevy of evening gown-clad women, monster plants, monster-masked villains, and some psychedelic, dreamlike layouts. He was masterful at designing worlds for bold characters and bombastic action.
All of the reviews I have read about it online have been positive, though I feel they don't quite account for how much bitterness is mixed in with its sweetness. Jason Sacks called it "a classic Sala style delight that brings new treats on every page." Graham Johnstone called it "an enjoyable romp" that will sweep readers along with its "joyful energy." Sala speaks more about all of his works, but "Super-Enigmatix" specifically in this interview.
In a Glass Grotesquely was published by Fantagraphics, and they offer a preview and more here. 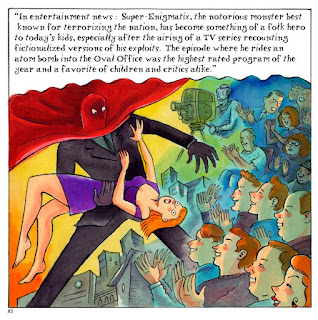