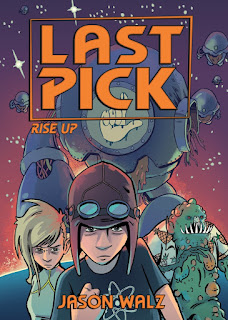 There is a burden on trilogy finales to tie up all the loose ends in satisfying, and increasingly novel, ways. In this sense I think that Rise Up is a successful capper to the Last Pick series. It is a gratifying conclusion to an action narrative but also goes beyond into more nuanced territory. I don't want to spoil too much about it, but I will say that it is thrilling and full of "heck yeah!" moments where the alien invaders get what's coming to them. There are also a number of family reunions, including twins Sam and Wyatt (which may be a spoiler, but it's on the COVER), though they are  tempered with sadness and loss. Along the way, there are also some quiet moments, bursts of humor, and great character work. One thing this book excels at is depicting characters in diverse, individualized ways that make them memorable. 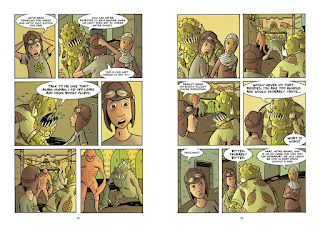 What really drew me to this series was the sheer amount of gruesome aliens throughout the book. They are drawn in a way that is very playful and filled with delight, as ugly as they are. But behind this monstrous facade is an important look at how assumptions can turn into prejudices. Many of these creatures have been manipulated, and as you can see from the preview, some even fall in with the rebellion.

As an added bonus, in this book there are lots of mech-suits used to battle the aliens. Mech-suits are cool. 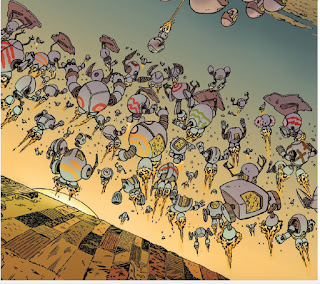 I love how all the Last Pick books explore how being disabled is not the same thing as being useless. The ruling aliens have dismissed entire swaths of the human population for being too old or somehow otherwise defective for physical or mental conditions. However, Wyatt and his crew prove them wrong. They are scrappy, crafty, and quite effective at what they do, on a universal scale. It's rare to find a book that balances having a message with also being exciting, but this one pulls off that trick.

This book's creator Jason Walz is a comics creator and special educator. Beside the Last Pick series, he is also known for his Eisner Award-nominated Homesick as well as A Story for Desmond.

The reviews I have read of this book have been positive. T Drecker wrote, "There's a wonderful sense of family and friendship, which gives the tale heart. While this is sold as a novel for young adults, I can easily see older middle graders enjoying it quite a bit as well." Kirkus Reviews gave it a starred review that summed up, "An affecting and unforgettable SF series with heart." As of this post, it currently has a 4.30 (out of 5) star rating on Goodreads.

Last Pick: Rise Up was published by First Second, and they offer a preview and much more here.

A review copy was provided by the author.