Something is Killing the Children, Volume One 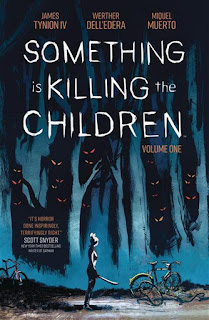 A million years ago when I was a wee ankle-biter in a comic shop, I remember Vic Bertini, the owner of Iron Vic Comics ("He rules Poughkeepsie with an iron fist!"), saying about Neil Gaiman's Sandman series that it was the only book that brought "Vassar girls" into his shop. From what I've read, the series whose first five issues are collected here, Something is Killing the Children, has similar drawing power for non-typical comics shop goers. After reading this trade paperback, I can see why. It's got an intriguing premise, compelling characters, and scenes that are genuinely horrific.

The setting for the story is the small town of Archer's Peak, where, as of the start of the book, at least 15 children have either been killed or gone missing. And by killed, I mean butchered, chopped up, and left in pieces. The entire town has been traumatized and is desperately searching for answers. One boy, James, who somehow survived a monster attack contacted a woman named Erica Slaughter. She has monster-killing expertise and a mysterious backstory. Not to mention that she carries around a stuffed octopus toy that she has regular conversations with. Her methods are unorthodox, to say the least, and I found her absolutely compelling.

As for the rest of the town, it is filled with a complex set of characters. James is sort of an outcast, and many students at his school suspect he is a murderer. Tommy is a manager of a local restaurant whose sister is missing, and he begins to tail Erica and complicates her work. The local police department, populated via nepotism, is flummoxed to the point of accepting unorthodox help. All of these various motivations and characterizations are what make this book work so well.

The artwork is appropriately spooky, with horrific monsters and lots of great storytelling that helps build suspense. This book does not show all the gory details, but it shows enough to get the reader to fill in the gaps in ways that elevate the horror. Plus, there are some very cool visual designs, particularly Erica's "work gear," complete with its creepy mask and power tools.

I have to admit I am not typically fan of horror comics, but this series is utterly compelling. I put it in the pantheon of superb, frightening, and unsettling horror comics with Southern Cross and Wytches. This volume collects the first five issues of the series, which was originally meant to be a limited series but has since been made ongoing.

This series is a collaboration between writer James Tynion IV, artist Werther Dell'Edera, and colorist Miquel Muerto. Tynion IV is known for his GLAAD Media Award winning series The Woods as well as writing a large number of Batman-related titles for DC Comics. Dell'Edera has drawn a number of titles for DC's Vertigo imprint. Muerto is a colorist with many credits for companies such as Boom! Studios, Vault, DC, and IDW. Tynion IV and editor Eric Harburn speak about the series in this interview.

All of the reviews I have read of this book have been positive. Jenny Robins wrote, "While there’s nothing earth-shatteringly original in the story, there are more than enough strands of intrigue to keep you turning the pages, from the mysterious Slaughter family Erica belongs to, the efforts of the local police, and of the relatives of the missing kids and their already layered stories." Justin Monday wrote, "The unique plot, excellent character writing, and nailbiting presentation are sure to excite, intrigue, and scare the hell out of you." Gregory Paul Silber opined that the series's "slow start may discourage some readers, but its first volume has loads of promise for patient ones."

Something is Killing the Children was published by BOOM! Studios, and they offer a preview and more info about the series here.