T-Minus: The Race to the Moon 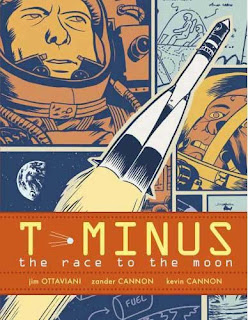 The race to put a man on the moon was one of the greatest competitions of the Cold War, and almost everyone is familiar with the end of contest and Neil Armstrong's famous speech from the lunar surface. What is not as well known is all of the hard work, calculations, and failures that preceded this great accomplishment. T-Minus captures many of the struggles that took place within both the US and the Soviet space programs beginning at T-minus 12 years before the first moon landing in 1969 (that would be 1957 for those of you who don't want to do the subtraction).

Movies like The Right Stuff and Apollo 13 show us the exploits of the astronauts, but they don't show as much about the engineers, technicians, and mathematicians who made space travel possible in the first place. Jim Ottaviani has almost cornered the market in terms of creating graphic novels about mathematics and scientists and here he shows just how much they contributed to the great success Armstrong eventually was celebrated for. However he does not give short shrift to the pilots and other space travelers. He paints a picture of them as people brave and capable enough to fly vehicles that were basically fancy projectiles.

This book contains a wealth of resources provided in an accessible manner. There is a time line of dates that runs parallel to the narrative, chronicling successful and failing launches. The important players in the story are identified clearly, credentials listed, and acronyms explained in footnotes. There is even a bibliography for further reading toward the end, neatly disguised as a newspaper page.

T-Minus would be a great resource for learning about Cold War positioning or aeronautic engineering. More information about the content of the book and Ottaviani's aims as an author can be found in this interview done by Tom Spurgeon. For all of the technical and historical information given, the narrative still flows well from moment to moment, capturing the wonder and spectacle of space travel as well as the tragic moments that often accompanied failure. Reviews online are frequently positive, noting the good blend between facts and drama, such as these by Ted Anderson and Jack Shafer.

The art is crisply presented in black and white. It was drawn by the Cannon brothers, Zander and Kevin, who are frequent Ottaviani collaborators. More about them can be seen at their blog Big Time Attic.

For more science-centered graphic novels, visit G.T. Labs, Ottaviani's official site.
On the T-Minus page, there are teacher resources, preview page links, and other links to space-related websites.
Posted by Stergios Botzakis at 11:17 AM