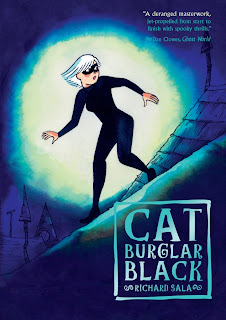 This graphic novel opens with a bang: a young girl clad in black is running through a forest chased by a huge wild boar. As she climbs a tree to escape its sharp tusks, we turn to see what events led to this predicament.

The girl's name is Katherine, though everyone calls her K. She is an orphan who does not know much about her parents, and she was raised in an orphanage by a terrible woman named Mother Claude who trained the children to become master thieves obedient only to her. K was her best pupil but eventually was set free when the crime ring was shattered. Cast about in the world, K comes to live with her Aunt Vivian at Bellsong Academy, a boarding school full of shady, mysterious teachers and interesting students that has fallen on hard financial times. In time, K learns that there seems to be a grand scheme behind her life events, and she gets recruited to save Bellsong Academy from bankruptcy by "procuring" a few items from a couple of rich, local families.

This graphic novel was written and drawn by Richard Sala, an accomplished illustrator who has been creating comics since the early 1990s. He uses a distinctive style and specializes in tales of mystery and monsters with a an underlying black sense of humor. His most famous works are the graphic novel The Chuckling Whatsit and the stories of Peculia that appeared in his Evil Eye comic books. More news about his various and upcoming works can be found at his blog. More information about the genesis and writing Cat Burglar Black can be found in this interview from Newsarama.

Cat Burglar Black has been named to a number of "best of" lists by book and library organizations, including The Young Adult Library Services Association's Great Graphic Novel for Teens 2010, the School Library Journal's Best Comics For Kids 2009, and Booklist's Top 10 Crime Fiction for Youth. A number of reviews, plus more information about the book can be found at its official page at Macmillan. As Andrew Wheeler has noted, the book is a rare one that can appeal to a wide range of readers.

A preview is available here from the book's publisher, First Second.
Posted by Stergios Botzakis at 12:23 PM