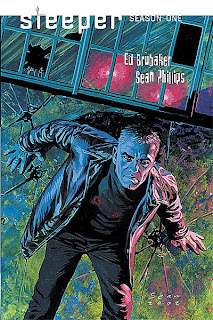 Holden Carver is a spy out in the cold, with no hope of going home. He is a superhero who was charged with infiltrating a criminal mastermind's organization, but the only person who knew he was a sleeper agent has been shot and is in a coma, clinging barely to life. Eventually, he rises in the organization to become a Prodigal, one of Tao's chief lieutenants. To make matters worse, Tao, the criminal mastermind, has the ability to control people's minds, and Holden is severely compromised in terms of maintaining his identity. Throughout the series, he vacillates between completing his mission and simply losing himself in the villain's role.

Holden has a unique superpower given to him by an alien artifact that has grafted itself to his nervous system. The artifact absorbs all pain and injury he would feel and stores it. When Holden touches someone, they feel the pain and injury, sometimes with the intensity to kill. The artifact makes it difficult for Holden to feel anything, including emotions, further muddying his circumstances. His associates are similarly colorful, especially Miss Misery, a woman who gains strength, beauty, and invulnerability from criminal, amoral, and libidinous behaviors, and Genocide Jones, his super-strong, seemingly invulnerable friend who is also a muscle-man and assassin.

Ed Brubaker and Sean Phillips created this series. They are frequent collaborators, and Sleeper was their first major undertaking. Since this series, they have gone on to others such as Criminal and Incognito. Brubaker is an Eisner Award winning writer who has also dabbled in being an artist at times. His most well-known works are Immortal Iron Fist, a run on Catwoman, his revitalized Captain America, and a well received series of Daredevil comics. Phillips has drawn a great number of American and British comics and received an Eisner Award for his work on Criminal.

Sleeper, Season 1 was originally published as 12 issues from Wildstorm, an imprint of DC Comics. It was followed by a second season that completes the narrative. It was a popular series, and it has received some attention from Hollywood: Tom Cruise and Sam Raimi are reportedly interested in creating a film version. Reviews have been largely positive as well. For example, Stephen Giordiano commented that the tightly plotted and compelling story really draws readers in. Paul W. Smith wrote that "both books fill the senses with blood and adrenaline, and ensnare the brain in a dangerous web of conspiracy." Jack Bauerstein83 called it a "hit on all counts."

A preview is available here.

Posted by Stergios Botzakis at 11:56 AM