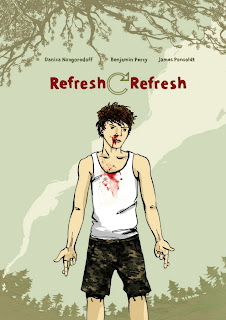 Refresh Refresh is a heart-wrenching, disturbing, and idiosyncratic look into the lives of three boys in a rural Oregon town. Many of the men here are Marine Reservists who have been called to serve in the Iraq War, leaving their families to fend for themselves. Josh, Cody, and Gordon turn to each other for support and to toughen each other up. They build a boxing ring and fight each other so they will be strong. They try to make their fathers proud while on their own, but they also find themselves longing for any contact, constantly refreshing their email accounts looking for replies from abroad. While their families struggle financially, they all fear a knock at the door from a uniformed duo charged with delivering grim news.

This graphic novel is an adaptation of a short story by Benjamin Percy, an award winning author who also teaches in the prestigious writing program at Iowa State University. This story was made into a screenplay by James Ponsoldt, a writer/director whose first movie is called Off the Black, before Danica Novgorodoff chose it for her subject. Novgorodoff is an artist, photographer, and designer who works for First Second Books. She has written another graphic novel, the well regarded Slow Storm, about moral dilemmas and immigration issues. She explains her work on Refresh Refresh extensively in this interview.

Novgorodoff has won an Isotope Award for Excellence in Mini-Comics and was nominated for an Eisner Award for Best Single Issue Comic, so it should come as no shock that her work has been well reviewed. Brian Beglin wrote that he is a fan of her work and is "thankful Novgorodoff is asking the messy questions, even if the answers make us hurt." The Graphic Novel Reporter's John Hogan called it a "beautifully done" story.