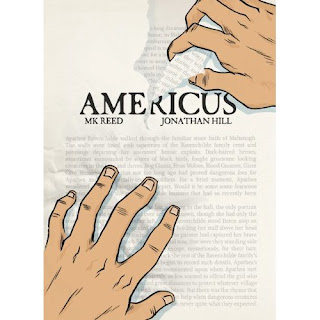 Neal is an awkward 8th grader who loves to read. His favorite book series is The Chronicles of Apathea Ravenchilde, the Huntress Witch, a fantasy/adventure. He and his best friend Danny bond over the books, but Danny's mother complicates matters when she decides that the books are promoting the occult and negative behaviors. She heads up an effort to ban the book series from the local library in the name of protecting the children and promoting Christian virtues. She also sends Danny off to private school, so Neal must face high school and mounting social pressures on his own.

This book treads a fine line between being topical and stereotypical in portraying the debate over community standards about books. It reflects a number of contemporary events concerning the Harry Potter book series. Americus clearly has an anti-censorship bent and was originally serially published online and hard copy during Banned Books Week. Reed's ability to instill her characters with complex personalities makes this graphic novel more readable and intriguing, coloring the censorship debate. Lots more information about the book is available here at its blog, Save Apathea!

Americus is the creation of writer MK Reed and illustrator Jonathan David Hill. Reed is a NY based cartoonist who contributes to a number of magazines and has self-published the graphic novels Catfight (scroll down) and Cross Country as well as a webcomic called About a Bull. This interview at Inkstuds explores her work on this graphic novel. Americus is Hill's first graphic novel.

Reviewers have been very positive about the book. Publishers Weekly praised the story and art, calling it "a lovely valentine to readers and, especially, to librarians." Gavin Lees wrote that "not only does Reed have a knack for the teenage vernacular and an easygoing sense of humour, but more importantly, she gives an empowering message about freedom of speech." The Comics Journal's Rob Clough offered some critiques over characterization but also added that "Reed has a special talent for Young Adult fiction."

A preview is available here from publisher First Second.

Thank you to Gina for the review copy!
Posted by Stergios Botzakis at 12:00 PM