Persepolis: The Story of a Childhood 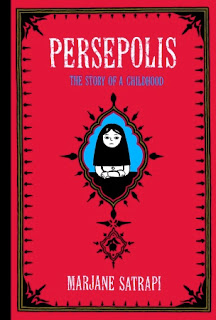 Marjane Satrapi was in elementary school when the Shah was ousted from power in Iran and a conservative Islamic regime took control. Because her family had communist and socialist leanings as well as a distant familial relationship to the deposed Shah, they had to navigate a perilous political landscape. During this time, Marjane struggles to find meaning in the vast changes, the many injustices, and the specter of martyrdom and war that hung over her country. She wrestles with religion, school, and the authorities who place restrictions on clothing, make-up, and popular culture. Being questioning and rebellious, Marjane has to deal with seemingly mundane situations that suddenly deteriorate into danger.

This volume contains the first two chapters of the books originally published in France. It is followed by a sequel where we follow what happens to Marjane as she becomes a young adult. This volume is very episodic and provides many scenes from a country in conflict where one family is struggling to get by. Incidentally, the title of the book comes from the Greek name for Parsa, an ancient capital of the Persian Empire.

Satrapi has become internationally famous and lauded for her graphic novel work. This article by Paul Gravett speaks to her life and work on this first volume of the series as well as its movie adaptation. This interview with Sean Axmaker also gets at her thoughts and intentions about making this graphic novel.

Persepolis has been almost universally accepted as a classic. Johanna Draper Carlson wrote that this "memoir is a must-read for a unique perspective on current events." Sarah Tan wrote that "Persepolis is a novel of the importance of being aware of ourselves and understanding the consequences of change." Offering a slightly contrary opinion, Christopher Skokna noted that Satrapi's storytelling chops could use some attention and he concluded that "for Satrapi to reach the front of the autobiographical comics library — and to deserve the attention this book is receiving — she must improve her skills and lengthen her perspective."

Some preview pages are available here from the book's publisher Pantheon.
Posted by Stergios Botzakis at 11:59 AM