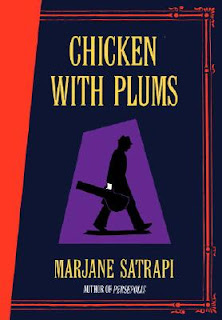 Chicken and Plums (Poulet aux Prunes, in French) chronicles the last eight days of Nasser Ali Khan, a masterful musician who loses the will to live when his choice tar, a musical instrument, is broken. Unable to find a suitable replacement, all music becomes sour to him. He falls into a depression and will not leave his room or eat. His family tries to intercede on his behalf, but he responds very differently to them than they'd like. Even though the main character is extremely egotistical, this tale is quite magical and evocative at times, almost like a fairy tale. Over the course of this book Satrapi interweaves dream-like sequences, flashbacks, and other stories quite expertly. I was very much affected by the narrative.

This is the fourth graphic novel published in the US from Marjane Satrapi. She is a graphic novelist and movie maker who is famous for her autobiographical works and also ones that focus on her family. This work focuses on her great-uncle, whom she learned about from old photographs. She talks about the making this book and its recently released movie version in this interview.

As with Satrapi's other works, the reviews of this graphic novel have been very positive. Danica Davidson wrote, "In a mere 84 pages, Satrapi gives something heartfelt and unique that can keep a reader thinking about it long after turning its last page." Carol Siegfried called the book "very powerful" and noted that "the stark black and white images are very evocative, despite their simplicity." Leroy Douresseaux gushed that "Satrapi’s ability to both engage us with the familiar and enthrall us with something different is the mark of an exceptional, special comic book storyteller."

Chicken with Plums is published in the US by Pantheon. A sizable preview is available from The Virginia Quarterly Review.

Posted by Stergios Botzakis at 11:55 AM