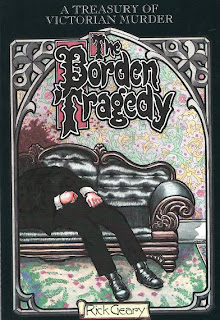 Lizzie Borden took an axe
And gave her mother forty whacks.
When she saw what she had done,
She gave her father forty-one.

I remember this macabre nursery rhyme from when I was a child and apparently it is still in circulation. The Borden Tragedy, which is based on research gathered from a number of sources, lets us in on the facts of the case. Andrew Borden was a prosperous businessman in Fall River, Massachusetts who had two children by his first wife Sarah. After being widowed, he remarried, and his two daughters Emma and Lizzie never took to their new mother, Abby. During the hot, humid summer of 1892, Andrew and Abby were found in their home brutally butchered by an ax. Accusations and conjectures flew about, and eventually Lizzie was indicted and tried for the crime. In the end, she was acquitted, but she never left Fall River and remained a notorious figure her entire life (and beyond).

This incident seems like one in a long line of sensationalized murder tales that have entranced Americans. The facts in the story are detailed in this graphic novel in an expedient way that allows the reader to pick up on them as well as be swept into the narrative. It is also interesting to see the back matter that contains newspaper accounts of the day concerning the case. Rick Geary, a multiple award winning comics artist, does his usual top-notch job of rendering historical scenes with great accuracy and detail as well as catching readers up in a tight plot.

Reviews of this, as with many of Geary's books, are very positive. Seth T. Hahne wrote that "Geary’s talent as a comics creator is evident" and that this graphic novel "serves as a fantastic primer to a famous unsolved double murder." Kelly Grant found the book "a chilling, immensely readable summary of the facts of one of nineteenth-century America’s most infamous crime." Publishers Weekly gave the book a starred review.

For those interested in Lizzie Borden, there is a recent new development about her. Some recently uncovered journals written by her lawyer have shed more light on her life.
Posted by Stergios Botzakis at 12:00 PM