The Graphic Canon, Volume 2: From "Kubla Khan" to the Brontë Sisters to The Picture of Dorian Gray 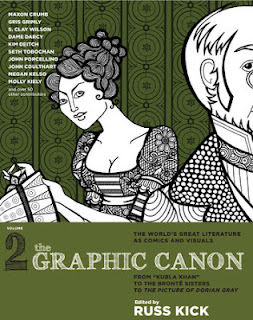 The Graphic Canon is an ambitious project that began earlier this year with the first of a projected trilogy of tomes. It has garnered positive attention from a number of prominent sources, including The New York Times, and this the second volume ranges roughly from the Romantic to Victorian literary eras. Not all of the entries are sequential art, and some are stand alone illustrations or text pieces with a few illustrations. Most of them have not been published before. This volume focuses more on British literature than the prior one, which was more international, but it still contains a number of winning entries from exciting creators, including established figures as well as up-and-comers.
Among my favorites are:

As you can tell, there is a lot of ground, both in terms of content and styles, covered within these pages. Most of it is not for young children, but other than the inclusion of an excerpt of Venus in Furs, nothing is beyond the ken of typical high school students. It seems that editor/provocateur Russ Kick played it a little safer with this volume. Maybe he is saving up "the good stuff" for the final volume, which will be more contemporary in scope?

Reviews I have read about volume two might not be as positive as they were about volume one, but they are still strongly in its favor. Emphasizing the worth of this book, Publishers Weekly wrote, "Apart from containing insightful introductions and wonderful artwork, these selections have a not-to-be-underestimated pedagogical value that educators will no doubt find invaluable in bringing classic works of literature to a 21st-century audience immersed in visual culture." Glenn Dallas offered a more tempered opinion, calling this collection "pretty hit-or-miss, depending on the source material and the artist," adding, "but it’s still an impressive sampling of historical and literary touchstones." Buzz Poole concluded that most of what is in this volume "exceeds expectations for how it absorbs familiar texts and shapes new lives into them, reminding readers how words read in a book can color so much of life that exists far beyond the page."

The Graphic Canon, Volume 2 is published by Seven Stories Press. A YouTube preview is available from the editor. Also, a number of preview images are available here from Brain Pickings.

Thank you, Gabe, for the review copy!
Posted by Stergios Botzakis at 11:29 AM