I am closing out Top Shelf month with an e-book I bought from Comixology for my Kindle Fire. Yes, they sell digital, too! 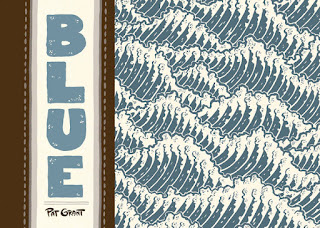 The facile way to describe this book would be to call it Stephen King's "The Body" meets District 9 set in Australia (I almost wrote Alien Nation, but that just means I am OLD). But Blue is much more than that. Part immigrant allegory and coming of age parable, the story follows a group of surly adolescents as they skip school, go surfing, swear, and argue amongst themselves. Apparently, their small town has gone to pot because of the influx of blue aliens who have moved in and overtaken neighborhoods, have their own unique kinds of food, and taken all the available work. Or maybe the local economy just dried up and the blue folk are convenient scapegoats. One day, these kids decide they are going for a trek down the railroad tracks to see the body of an unfortunate alien who was in the way as a train rushed by. All the while, issues of racism, classism, and national pride ring through the plot and characters.

This deceptively complex book disarms the reader with a very cartoonish style, and writer/artist Pat Grant demonstrations some great storytelling skills. It is an outstanding debut work, one that smacks of technical and artistic expertise. That said, this Melbourne-based comics creator is a relative newcomer and has worked on a variety of small projects listed here. He also is interested in surf culture and has an excellent essay about the history of Australian surfing and underground comix as his influences in the back pages of Blue.

Reviews I have read online have been very complimentary about this freshman effort. Andy Khouri called it "an uncommonly sophisticated look at prejudice and localism." Bill Sherman wrote, "Sharply unsentimental and often darkly funny, it makes a powerful debut for artist, writer and, zinemaker Grant—a must read for anyone invested in following literary comics." Slate's Dan Kois called it "thoughful and complicated" and added that it "really stuck with me after I read it."

A preview and much more is available here from the publisher.

The whole book is also available online here, though I think it is still well worth its purchase prices. Support an author who is starting out!

Also, if I have not a great job selling you on the book - or if you are already onboard - you should check out Pat Grant's SHAMELESS PUBLICITY DOCUMENT!
Posted by Stergios Botzakis at 11:12 AM