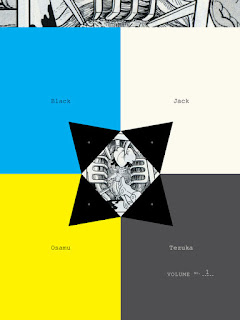 Black Jack is one of the most popular manga ever published, a series that even had social repercussions in Japan where it first appeared. It was written and drawn by Osamu Tezuka, the "God of Manga," a huge figure in Japan who was sort of Stan Lee and Walt Disney combined, leaving an indelible legacy of comics and cartoons. Much of his work was for children, characterized by his most known creations Astro Boy and Kimba the White Lion. Black Jack is decidedly different, a work more for adults.

This series follows the exploits of a scarred, mysterious doctor-for-hire. He is not licensed, but he is highly skilled and considered the best surgeon in the world, the person who you would turn to as a last and best resort. He will take any job, but his asking price is high, and he does attract a great number of shady characters. Still, he is not as mercenary as he would seem, and after reading a few stories it becomes apparent that he is quite charitable and just. All the same, he comes across as a dark, ominous, and dramatic figure, cloaked in a cape and face partly obscured by his wild hair. Take for instance the first story in the volume, where a crime lord hires him to treat his good-for-nothing son who has been mangled beyond comprehension:
Although Tezuka widely influenced manga and propagated the "big eyes" style that is pretty cutesy and cartoonish, in Black Jack he drew in a more realistic manner. This style is especially apparent in the surgery scenes, which I guess makes a lot of sense as Tezuka actually trained to be a doctor before he began working on comics. Still, there are a great number of science fiction or fantasy elements, such as his surgery on a woman whose conjoined twin has both awareness and great mental abilities to deter those who would separate her from her sister: 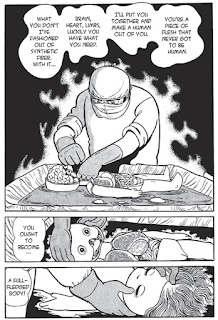 Black Jack not only saves the little sister, he builds for her a body. This woman, Pinoko, becomes his assistant and lives with him. She looks like a small, baby doll girl, and he treats her as such, but she calls herself his wife and is very jealous of his interactions with women. This strange characterization is somewhat jarring but emblematic of the powerful, memorable personalities that abound in this book. There is no real over-arching storyline, and each chapter is self-contained. A reader can just jump in and read any of these suspenseful and moralistic tales of life and death.

All of the reviews I have read have praised this classic manga. Heather Bretschneider wrote, "While the medical scenarios it presents may not always be accurate, they always succeed in creating a thoroughly enjoyable read from start to finish." Elliot Page commented that "despite its (admittedly few) flaws, I would not hesitate to recommend Black Jack to almost anyone."

Despite its (admittedly few) flaws, I would not hesitate to recommend Black Jack to almost anyone. - See more at: http://www.anigamers.com/2010/03/review-black-jack-vols1-9-manga.html#sthash.sNV5ctUj.dpuf

Black Jack, Volume 1 was published in the US by Vertical, Inc., and they have 17 books that cover the entire series.
Posted by Stergios Botzakis at 12:00 PM