The Glorkian Warrior and the Mustache of Destiny 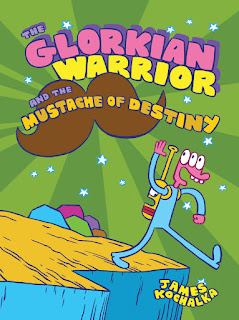 I read the first book in this trilogy, and I did not really get or like it. I think in general, James Kochalka's work is hit or miss for me. There are a few, like Monkey Vs. Robot, the first two Johnny Boo books, and Superf*ckers that I really enjoyed. I respected and mostly appreciated his American Elf work, too. And there are some that I pretty much despise, like the later volumes of Johnny Boo I have read. Still, the man was named cartoonist laureate of Vermont, and he is amazingly prolific. So I gave this volume a shot to see what I thought.

What I can see holds from the first volume is that the Glorkian Warrior is still utterly clueless and has the attention span of a gnat. And like the previous volume, he is balanced by an intelligent and resourceful backpack who is the (pretty much unheeded) voice of reason.

In this book, the silliness gets ratcheted up a notch or two. There is a cup of coffee named Wendy, a Glorkian SuperGrandma, a space god named Quackaboodle, and a bunch of alien children who want to join in on GW's adventures. Despite myself, I found some of these antics to be pretty zany and funny. The satirical way the book skewers adults' frequent sense of self-importance is admirable. And the ending with its sudden appearance of mustaches (I'd say it's a spoiler, but c'mon read the title of the book!) tickled my fancy especially. This book is not my favorite ever, but it has its positive qualities. I might not have appreciated all of the jokes, situations, or characters, but I have to say it is an enjoyable piece of juvenile dada. I am sure there will be a large array of young readers who dig the playful, stream-of-consciousness logic of this universe.

The reviews I have read about this book have been largely positive. Rosemary Kiladitis wrote that this volume is like the entire series: "It’s fun, it’s perfect for young kids, and a great introduction to comics and sequential storytelling." Kirkus Reviews wrote, "Kochalka’s oddly wonderful—and very offbeat—bubble-gum–psychedelic, madcap adventures may not be for everyone, but they certainly are creatively unparalleled." Erik Cheski praised the book for its sense of play and bold, silly, colorful characters.

The Glorkian Warrior and the Mustache of Destiny was published by First Second, and they have a preview and much more here.