Artemis: Wild Goddess of the Hunt 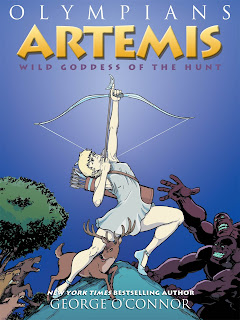 Some might think a goddess in charge of childbirth, maiden women, the moon, and the forest, would be somewhat demure, but they would be very wrong. Artemis: Wild Goddess of the Hunt tells the story of a goddess who is youthful, energetic, pristine, and downright deadly. This combination is becoming a common theme with this series, as Ares and Apollo have also been shown to be extremely beautiful but downright nasty as well. Perhaps I should not have been so surprised in the case of Artemis though. After all, she showed herself to be quite the badass when she assisted her mother Leto with delivering her own twin brother when she was little more than a week old.

The rest of the book does an excellent job in fleshing out the personality and characteristics of this complex character. And I have to say that the body count is pretty high. She and her brother Apollo slaughter the family of queen Niobe when she blasphemes against their mother. She turns the hunter Actaeon into a deer so he can be eaten by his own dogs after he dares peek at her while skinny-dipping. She tricks the twin monstrous giants Otus and Ephialtes into murdering each other. She also does in the mighty hunter Orion, who had became her compatriot but was so hurt when she refused his advances that he started to slaughter all the animals on Earth. The only respite from all the bloodshed in is in the recounting of the tale of Atalanta. 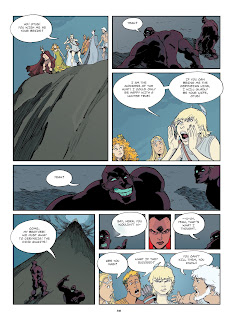 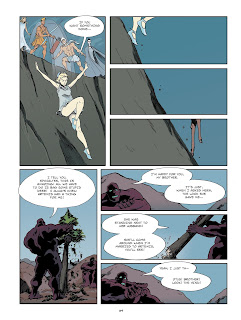 This is the ninth book in the Olympians series, and it is a very strong entry. I loved the way that a narrative was woven to connect all of these tales. I also loved how well the gods' personalities shine through in ways that reflect not just this book but also the other entries in this series. That all the books are this consistently excellent is amazing and commendable.

In addition to the numerous entries in the Olympians series, artist/writer George O'Connor has created the American history journal account Journey into Mohawk Country and the dystopian future book Ball Peen Hammer, written by Adam Rapp. He also has published a number of children's picture books. His work is typically excellent, and I very much appreciate his voice in the notes and back matter of the book. He gives great insight and humor about his choices. He speaks about his career in this interview.

Reviews I have read about this book have been very positive. Kelly Fineman enjoyed the book and also noted, "O'Connor's notes are engaging and provide background material for much of the art and writing." Library Linsey wrote that he "continues to artfully share his knowledge of Greek myth in another dynamic graphic novel representation." Kirkus Reviews cautioned readers, "Admire her—from a distance—and don’t dis her or her mom."

Artemis: Wild Goddess of the Hunt was published by First Second, and they have a preview and much more here.