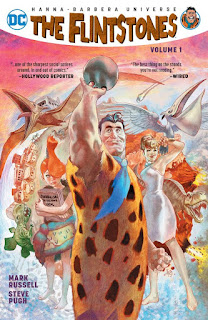 I definitely would not expect to find much provocative social commentary or satire from a book based on licensed characters. Those types of comics are usually insipid knock-offs of more vital media versions, but this Flintstones comic is actually very insightful, fun, and way more well done than I would have expected. This volume collects the first six issues of the ongoing series, which is about to be at issue #12 at this writing. Instead of it being a watered-down version of The Honeymooners, this series casts the family in a more realistic, bittersweet light. Fred is a war veteran stuck in a low-end job, always trying to advance but always getting taken advantage of. 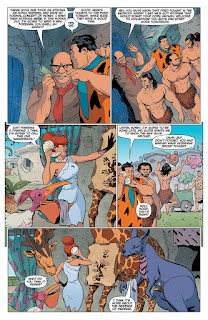 Wilma is a stay-at-home mom with artistic tendencies, and Pebbles is a young adolescent with a keen eye and sharp tongue. Over the course of this series, they deal with many social issues and situations that mirror and comment on our contemporary ones, turning them on their heads in humorous and satirical fashion. For instance, both the Flintstones and the Rubbles catch flack for having nontraditional marriages (they are monogamous, whereas the norm is to be polygamous). They deal with vacuous politicians who offer no solutions other than blunt, brute-force tactics to deal with enemies (i.e, anyone who seems weird or foreign to them). They go to church and find a wide array of objects and deities offered for worship. And they are invaded by alien teenagers looking for a thrill during spring break.

Perhaps the darkest and most troubling aspect of the book has to deal with capitalism and consumerism, where people are constantly being pushed to buy household products that they may not need, just to keep up appearances. Many of these items and appliances are actually living things that have personalities and can communicate, though they are ignored and treated like objects. When their people are not around they talk to each other and loosen up some, though they accept their lots in life and do not rebel. 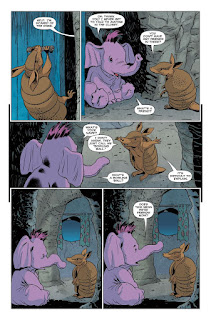 A common theme in this book is that pretty much everyone's happiness in this book is built on somebody else's misery. And a dark edge tinges pretty much every funny thing in this book, from the origins of Bedrock itself, to the way Barney and Betty Rubble adopt their son Bamm-Bamm, to the presence of the prototypical homosexual couple Adam and Steve. The satire is more pointed than shocking, but what is actually shocking is how admirable and satisfying this series is. Many comics today take a "grim & gritty" take on previously light material in ham-handed and oblivious ways. This book has a lot of heart, depicting very human characters with a complex blend of humor and pathos. Much of what makes it work is the combination of clever plotting plus the character designs that mesh together a version of realism with cartoon elements to make for some impressive, expressive scenes. Never in a million years would I expect to be reviewing a Flintstones comic here, but this one is a surprising gem.

This series is a collaboration between writer Mark Russell and artist Steve Pugh. Russell has collaborated on a few notable comics and comics-related books, including the profane and funny God Is Disappointed in You and a contemporary reboot of Prez. Pugh has been active in comics for decades, and his most notable works in the US have been multiple runs on Animal Man and drawing the Saint of Killers mini-series. Both creators speak about their work on this series in this interview.

All of the reviews I have read about this book have been positive. Publishers Weekly gave it a starred review and summed up, "Broad satire like this can risk a level of smarminess, but this is avoided through some sweet characterizations that present Fred and Barney as lovable lunkheads whose sincerity often sets them apart from the rest of Stone Age society." Ken Petti wrote that it was full of "solid stories with real emotional punch." Jacob Brogan commented about the various satires and that "what emerges is a story about the profound fragility of civilization—but also about the unlikely durability of the human connections that make it up."

The Flintstones, Volume 1 was published by DC Comics, and they have more info about the series here.
Posted by Stergios Botzakis at 12:00 PM