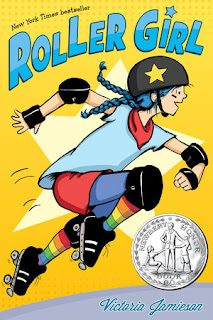 I have had this book on my shelf for a little while now. I bought it at my local independent book store after I had read Comics Squad: Detention and thought that Victoria Jamieson's entry in that anthology was the best part of the book. Roller Girl was a 2016 Newbery Honor book and has a slew of other honors as well. The story here follows a girl named Astrid who is at a crossroads, growing up and becoming more at odds with her mother as well as tenuous with her best friend Nicole. One day the trio attend a roller derby match, and Astrid is completely blown away. 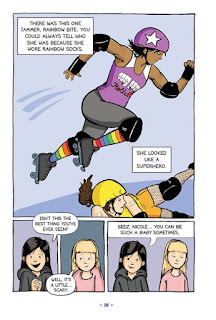 Soon after, they learn that there will be a roller derby camp that summer, and Astrid cannot wait to sign up. Nicole is not so keen on joining and opts instead to attend dance camp, where she has a different set of friends, one of which is very much at odds with Astrid. Complicating matters, she lies to her mother that Nicole is at camp with her, so she does not worry about her getting a ride home everyday. And adding even more to this drama is Astrid's realization that roller derby is very challenging, taxing, and tiring. 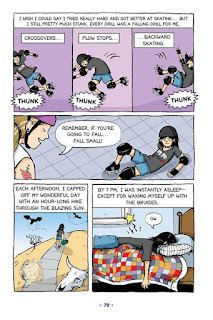 What I loved about this book was how it approached all of the physical and emotional adversity Astrid has to face in very real and relatable manner. Over the course of the book, she learns much about friendship, stamina, and herself. I felt that the characters and relationships were complex and nuanced, and that this book was done in a smart way that would appeal both to young people and adults, without insulting either audience. The ending, which focuses around Astrid's first competitive match, does not go exactly as she intended but it's a great learning experience. The conclusion was mostly sweet and just a little bitter, and I'm not going to lie but it made me tear up. I am a total sucker for a story told this well, where all the disparate narrative threads come together in such an artful manner. This book deserves all the accolades it has received (and then some!).

This book's creator Victoria Jamieson is a children's book illustrator and graphic novelist who has since published a few others since this debut. One is the stand-alone volume All's Faire in Middle School,  the other two entries in her Pets on the Loose! series The Great Pet Escape, and The Great Art Caper. She speaks more about her work on Roller Girl in this interview.

All of the reviews I have read about this book have been celebratory. Publishers Weekly gave it a starred review and stated that "readers will want to stand up and cheer." Kirkus Reviews also gave it a starred review and wrote that it was "Full of charm and moxie." Esther Keller summed up, "This is a great summer or all-year read that will thoroughly be enjoyed by middle-grade readers."

Roller Girl was published by Penguin Random House, and they have more info about it here.
Posted by Stergios Botzakis at 12:00 PM