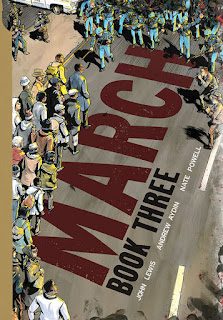 I have been remiss in reading this book, especially since it won a National Book Award. I thought that the second book in the trilogy was better than the first one, and this third volume is just as excellent. Mostly it covers the events of the march from Selma to Montgomery, a pivotal event in US civil rights history and an impetus for the passing of a national Voting Rights Act. 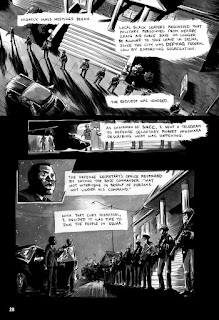 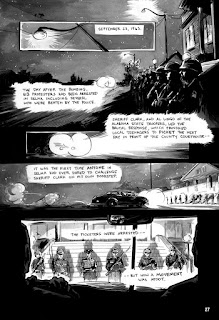 As with the other books in this series, it is simply amazing just how much John Lewis was involved in during his life. This book covers much ground, giving light to a tumultuous and important era of US history, showing the brutality of racism, the courage of those involved in the movement, and the eventual positive effects of non-violent protest. This book is an emotional roller coaster, but it's not simply cheap drama. The events it chronicles are still vital to our present day circumstances, and I daresay it should be read by people young and old, in-school and out. It's an important tale, and it deserves as wide an audience as possible.

Congressman Lewis and his staffer Andrew Aydin penned the narrative, and it was illustrated by Nate Powell, a veteran and expert creator with a long list of praised works, including the graphic novels The Silence of Our Friends, Swallow Me Whole, and Any Empire. As you can see from the excepts, Powell's artwork is dynamic and energetic, and he makes excellent tonal use of black and white to tell riveting, moving, and powerful tales, even when people are simply speaking. All three creators speak about their work on the March trilogy in this interview.

Not surprisingly, all the reviews I have read about this book have been glowing. Michael Cavna concluded, "This is, flat out, some of the most immersive graphic-novel art I’ve experienced in years." Oliver Sava called it "an essential read in a turbulent political climate." In a starred review from the School Library Journal Mahnaz Dar summed up, "This essential addition to graphic novel shelves, history curricula, and memoir collections will resonate with teens and adults alike."

March, Book 3 was published by Top Shelf, and they have lots more info about it here. Its list of honors is historically impressive: 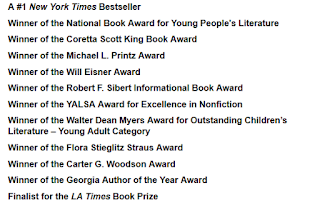